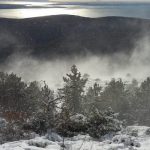 Writer Nick Hunt walked the invisible pathways of Europe’s named winds for Where the Wild Winds Are. In his third extract, Nick follows the freezing Bora –named for Boreas, the ice-bearded Greek god of the north wind.

Gornje Sitno was the highest village, the end of the road. Six inches of powder snow squeaked under my boots as I climbed, snowballing at the tips of the laces, making lion’s tails. The snow had favoured the windward side of every leaf and blade of grass, while tree trunks and telephone poles were vertically scored with a furred white line angled precisely northeast, as if magnetised to a new pole. The world had been perfectly bisected, divided between spring and winter.

Sheltered by the slope at first, I could only hear it. But then I reached the top, and the Bora was upon me.

It was on my skin, freezing my face, blizzarding into my eyes. My eyelashes were frosted, my beard stiff with ice. I made the mistake of removing my mittens and my fingers throbbed so much it felt as if they’d been slammed in a door. The chill of it pushed me back, forced me to proceed in a crouch, as if advancing under fire. Or as if I was bowing.

It was in my ears, but it wasn’t blowing; nor was it moaning, whistling, howling, or any of the other words usually used to capture wind. It was less a sound than a sensation, a nameless energetic thing that erased the line between hearing and feeling; for the first time in my life, I understood sound as a physical force. It was in my lungs, under my skin. Like a religious maniac, I roared my appreciation.

The Bora roared right back at me, and the mountainside ignited. An eighty-mile-per-hour blast lifted veils of powder snow, frozen spindrift that swirled like smoke, spinning itself into ice tornadoes that leapt from slope to slope before blowing apart again in mists of agitated dust. It happened again and again as I watched, each white eruption spreading and merging to create gyrating clouds that travelled as fast as a forest fire, hurtling down the mountain. The Bora’s face was visible in each fleeting pattern of snow, each convolution and curlicue, each vortex, twist and coil. I saw the invisible appear, the formless given form.

What did the Bora say to me, on that frozen mountainside?

I could not read its words. Its language was too large.

Nick introduced this five-part series with an extract of the book’s opening essay and, in his second extract, tracked northern England’s Helm wind. In his next post, Nick shares his experience of the ‘snow-eating’ Foehn of Switzerland, bringer of wildfires and insomnia and clear skies.