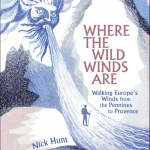 Writer Nick Hunt has walked the invisible pathways of Europe’s named winds, to discover how they affect landscapes, people and cultures through which they blow. Five extracts from Where the Wild Winds Are begin with the book’s introduction.

The wind almost blew me away for the first time in 1987, when the Great Storm hit the British Isles. I was six years old. It was on the mountainside of Ynys Enlli, the holy island off the coast of North Wales, where my mother took me every year to volunteer for the local trust and hear the seals sing at night. Now the storm had stranded us there, for the weekly boat was cancelled. There was no shop on the island, and food supplies were running low; one of my most vivid memories is my mother, by the glow of a paraffin lamp, inexpertly skinning a rabbit the farmer had shot for stew. I remember hugging the cottage wall on trips to the outhouse in the yard, and my fear of slates zipping off the roof to brain me if I ventured far. But what I remember above all else is standing on the mountainside and the wind filling the coat I was wearing – many sizes too large for me – and my feet actually leaving the ground before my mother grabbed my legs and dragged me back to earth. We laughed about it afterwards. It became one of those stories. Could it have actually blown me away, across the foam-flecked Irish Sea? I’m not sure, but for years part of me secretly wished it had, and I imagined being borne through the sky to Ireland, France, America, Iceland, the Arctic Circle or any of the other wonderful places waiting in the world. I’d only travelled a foot off the ground. Nevertheless, I couldn’t help feeling slightly blessed.

Despite being moved by the wind in this way I did not grow up to be a glider pilot, a windsurfer, a paraglider or a wind turbine engineer. My attempts with kites mostly ended in dismal tangles of string. I did not become a meteorologist, one who understands weather as a science, as I’m sure this book will make only too clear. What I did become, however, was someone with an urge to travel, and especially to travel by walking, which allows you to follow paths not dictated by road or rail, paths not marked on any map, or to follow no path at all; to wander and to wonder as freely as your feet can take you. But every journey has a logic, even if it’s an invisible one. All travelling, I came to understand, is an act of following something, whether a coastline, an ancient migration, a trade route, a border or someone else’s footsteps. Scanning the travel section of a bookshop, it appeared that everything had been followed that it was possible to follow. There seemed to be no trails left that hadn’t been traversed.

And then one day I saw a map with paths I hadn’t seen before. It was a map of Europe transfigured by coloured lines, marauding arrows like troop advances that ploughed across borders, over land and sea, connecting regions and cultures that seemed quite separate in my mind: Latin with Slavic, continental with coastal, North African with southern European. These mysterious corridors had names every bit as tantalising as the Silk Road or the Camino de Santiago: the Mistral, the Tramontana, the Foehn, the Sirocco, the Bora. There was even one in the north of England, more brusquely named the Helm. The map showed the routes of local winds, which blow with tremendous force at specific times of year – normally at the transitions between seasons, such as when winter turns to spring – and, I was intrigued to discover, they were said to influence everything from architecture to psychology. The fact these invisible powers had names, rather than simply compass directions that described where they were from, gave them a sense of majesty, even of personality. They sounded like characters I could meet. Those swooping, plunging arrows suggested routes I might follow, trails that had not been walked before. As soon as I saw that map I knew: I would follow the winds.

In the second in this series of five posts, Nick describes his encounter with the Helm, England’s wild wind, in the landscape of the North Pennines.