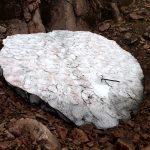 Writer Nick Hunt travelled to Scotland’s Cairngorms in search of a once permanent presence that’s becoming another marker of a new transience: enduring snows that serve as scraps of deep of time, now endangered on our warming island.

Garbh Coire Mòr in the Cairngorms is home to two of Scotland’s longest-lying snow patches: Sphinx and Pinnacles (named after nearby climbing routes). They normally endure year-round in this remote, high corrie. But things are not normal any more. In recent years they have melted before the end of the summer, bellwethers of a wider change.

In the last week of September I went to find what was left of them.

After catching the sleeper train to Aviemore and walking for around ten miles up the rugged post-glacial valley of the Lairig Ghru, I arrived at the foot of Braeriach in the early afternoon. Cloud hung low over the mountain but in the hollow of Garbh Coire Mòr it lifted for a minute or two, just enough time to give me a glimpse of two pale eyes.

As I approached, leaving the path to walk over a boggy weave of blaeberry, moss and reindeer lichen – the tundra landscape that turns the Cairngorms into an exclave of the Arctic – the shapes of the snow patches became more apparent. It was difficult to guess their size. The final climb was a scramble up wet, sliding scree.

First I went to Sphinx, the smaller, slightly higher patch. Up close its snow wasn’t smooth, or even particularly white, but blushed pink with the run-off of the mountain’s reddish soil and stained black with darker grime, hairy with pine needles. Its surface was pitted and eroded from ablating and refreezing. It hardly looked like snow at all but a lump of spoiled meat.

Pinnacles was bigger, perhaps eighteen metres long and a metre tall, though underneath it had lifted off the rock and appeared to be almost floating. I’d brought my ice axe with the idea of attempting a traverse, but I didn’t think it would hold my weight. Besides, it seemed disrespectful.

I laid the axe on top for scale and simply sat for an hour or two in the snow’s company. I put my bottle underneath to catch its dripping water. I felt reluctant to leave its side, as if I was keeping company with a stranger, terminally ill. I didn’t want to leave it alone. But at last I had to.

In the words of Iain Cameron, a dedicated ‘snow patcher’ who studies these icy anomalies, Sphinx was ‘critically endangered’ in the week I went to find it. For a while it looked like 2019 would be the first time in recorded history that it had disappeared for three years in a row. But it has been lucky. Early October snow prolonged its lifespan slightly, and a recent heavier snowfall has buried it in white again. Against all odds, it looks safe for this winter. But, in the new normal of runaway global heating, no one knows what the coming years will bring.

It is easy to understand the appeal of these unlikely snows. They are not only scraps of winter but scraps of history, of deep time. Obvious symbols of endurance, of bloodyminded obstinacy, they are also thermometers that self-destruct as our island warms. When their last crystals have dripped away, the national thaw will be complete and Britain will be entirely free of snow in summer. Bare.

At last it started getting dim, so I turned back down the mountain. The smudged eyes watched me go as the heavy cloud drew in again. When I looked back from further down the slope they were gone.

With thanks to Iain Cameron, who co-authored Cool Britannia with Adam Watson (Paragon Publishing, 2010) and who photographs, measures and writes about snows on Britain’s hills. Find him on Twitter at @theiaincameron.