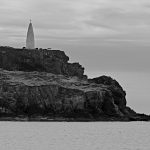 ClimateCultures editor Mark Goldthorpe launches a series exploring film and audio that open a space to reflect on change — choosing pieces on how human and non-human animals live, and how processes of time and tide shape our coasts.

In director Alex Lockwood’s beautifully thoughtful and moving film, 73 Cows (which I discovered via Aeon in October 2018), farmers Jay and Katja Wilde share their journey from raising beef cattle to animal-free farming — and the journey of the animals themselves. It’s an insightful encounter with the realities of one couple’s life on the land, living in close relationship with animals. I find it helpful because of its intensely personal focus cuts through some of the more familiar contest between opinions and the wielding of facts and figures in the debate on how we farm and feed ourselves and what ‘animal rights’ mean. It’s not trying to persuade me of anything, other than of our common ability to feel the weight of our own and others’ circumstances, and the tasks of questioning those circumstances and finding our own better way through them.

As the post at Aeon puts it: “Coming to recognise them as individuals with rich inner lives rather than just ‘units of production’, Wilde eventually found the emotional burden of sending his cattle to the abattoir too crushing to bear … Melancholic yet stirring and gently hopeful, this short documentary … deftly traces the complexities of Wilde’s decisionmaking process. In doing so, it reaches far beyond the English countryside, asking viewers to reckon with the moral intricacies of eating animals.”

Whatever your views on the topics before or after watching the film, I imagine you will find something moving in the experience it brings you.

Artist Marcus Vergette has created a series of Time and Tide Bells around the UK, each marking the local high tide. “The rise of the water at high tide moves the clapper to strike the bell. Played by the movement of the waves, the bell creates a varying pattern. As sea level rises the periods of bell strikes become more frequent, and as submerged in the rising water the pitch will vary.”

Five bells have been placed so far, at Appledore (Devon, England), Aberdyfi (Wales), Bosta (Isle of Lewis, Scotland), Trinity Buoy Wharf (London), and Cemaes (Anglesey, Wales). Marcus says of Appledore (where the first bell was installed in May 2009), “this estuary has some of the highest tides in Europe. Here they build ships, fish, trade to the Americas and to Russia. An important and historic port.” Each bell is inscribed with a text chosen by the local community. At Appledore, this is:

So far, I’ve only visited the Trinity Wharf bell but I hope to experience each one. Trinity Wharf is where lighthouse keepers were trained and navigation buoys were made, so the resonance of its Time and Tide Bell with thoughts of future coastal hazards and adaptations is strong. But I chose the audio clip from Appledore instead because its soundtrack — the bell ringing against the waves — immediately said something to me of a place I’ve not yet been to (though I lived in Devon for a while) but which — like everywhere else — is undergoing change partly as a result of my actions, my existence. And the quiet, contrasting sounds of nature — the waves — and its cultural counterpart — the bell — captures a short moment within a changing relationship.

Time and tide in the more-than-human

Is there a connection between my two selections? Not at first sight maybe, and I certainly didn’t select them with any conscious link in mind. But the same mind chose them … so now I think of the slow-yet-rapid timescales of change on our coasts and of our experience of them, over our lifetimes and in those sudden, dramatic coastal shifts of storm and flood and collapse; and now I think of the ‘bigger picture’ and the longer story behind the Wildes’ story, the currents of change in how humans have understood other animals throughout our history, how each of us chooses to live with the domesticated ones and the wild ones now. And I remember that change is possible, natural, necessary: sometimes it comes one person at a time, sometimes in the movement of the herd. And, as we meet or make these changes, or as we don’t, still the bell chimes. What do we miss when we don’t hear its notes under the noise of everyday life?

“There is a tide in the affairs of men,
Which taken at the flood, leads on to fortune.
Omitted, all the voyage of their life is bound in shallows and in miseries.
On such a full sea are we now afloat. And we must take the current when it serves, or lose our ventures.”

“But dreaming builds what dreaming can disown.
Dead fingers stretch themselves to tear it down.
I hear those voices that will not be drowned
Calling, there is no stone
In earth’s thickness to make a home
That you can build with and remain alone.”

And, then, after I’d written this post, reading a final BBC piece for the notes below, I discover that “Marcus came up with the Time and Tide idea following the foot-and-mouth outbreaks in 2001. Marcus and his wife Sally lost their stock of Angus cattle and Devon Closewool sheep in the epidemic and they were unable to leave their farm at Highampton because of the restrictions. Marcus’ permanent reminder to the awful events of 2001 is a bell, which hangs beside the village hall in Highampton.”

I discovered Alex Lockwood’s award-winning 73 Cows through Aeon (October 2018) and posted it to our Views from Elsewhere page (since discontinued) before I realised that my response to this film needed a different space — and then that this space might be useful for others to share their film and audio discoveries. Do check out our Gifts of Sound and Vision page as more offerings appear.

You can discover more of Lockwood’s films at … Lockwood Film. A review at film site Short of the Week says that 73 Cows “captures beautifully a crucible for Jay and Katja, and better than almost any documentary I’ve seen captures the moral weight of its action. Jay is torn by the logistical complexity of the farm’s change, and keenly feels the weight of obligation to his dead father from whom he inherited the farm. Yet, nobly, he is steadfast in his conviction. Agree or disagree with the ethics of animal husbandry, what else but courage do you call it when folks risk everything and defy societal norms to do what they feel is right?”

In an interview ahead of the Raindance Film Festival 2018 (where the film premiered), Alex said “I hope that when people watch 73 Cows that they really relate to Jay and the struggles that a lot of farmers must be secretly facing. Jay managed to completely turn his life around and do what he felt was right despite losing money, turning his back on his tradition and also going against the grain within his local community. So ultimately I see it as a hopeful film. Maybe people will watch it and feel like they can get over their own personal demons in the same way that Jay has gotten over his. That would be nice.” NB: This interview was for The New Current website, but is no longer available.

Sculptor Marcus Vergette discusses his project at Time and Tide Bell as “a permanent installation of bells around the UK rung by the sea at high tide. The Time and Tide Bell has been permanently sited at the high tide mark in five locations.” A new one is planned for Mablethorpe (Lincolnshire, England), with a description at the website of Transition Town Louth (which also has other coastal change related arts, Across the Seas).

In a short piece for the BBC website (3/9/10) for the creation of the Trinity Wharf bell, Marcus says “The Time and Tide Bell creates, celebrates and reinforces connections between our history and our environment … Here at Trinity Buoy Ward in Leamouth, it will serve as a powerful marker of sea level rise at the very heart of our maritime history.”