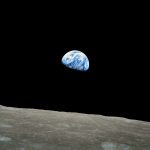 For Gifts of Sound & Vision, Mark Goldthorpe chooses Earthrise — a film about a moment a half-century ago that transformed our vision of the world and what might be possible in this short historic episode, modern human civilisation.

Gifts of Sound & Vision is a series where ClimateCultures Members explore personal responses to film and audio pieces that they feel open up a space for reflection (whether head-on or at a slant) on environmental and climate change.

Fifty years ago, on 28th December 1968, three men returned to Earth after a six-day journey during which they became the first humans ever to escape the gravity of their home planet. They had slipped into deep space, entered the moon’s gravity and made ten orbits of that world to observe what people assumed one day might become a new base for interplanetary exploration.

As such, Frank Borman, Jim Lovell and Bill Anders were the first humans to see the far side of the moon with their own eyes, and the first to see the Earth rising above the moon’s grey horizon. As this excellent 30-minute film by Emmanuel Vaughan-Lee shows, using archive footage from that 1968 Apollo 8 mission alongside present-day recollections from all three crew members, the Earth offered the only patch of colour they could see in all the universe. The deep black of space, countless sharp white stars, the moon’s grey endless plains and craters rolling on and on just 60 miles beneath their capsule — and the one white-blue-green-brown marble that emerged in front of them, over 240,000 miles away.

That thumb-sized ball was home, and the colour photo they took of that first Earthrise — an instinctive, spur-of-the-moment act and a wholly unplanned byproduct of their mission — had an immediate and deep impact on everyone who saw it after their return fifty years ago, just as the sight of distant home had a lasting impact on those three men.

The ‘whole Earth’ image became the emblem of a new environmental awareness, the icon of an emerging age, and the hope of those three astronauts that national boundaries and short-term, near horizon problems might somehow start to lose their fatal grip on our imaginations. They admit in this film to being disappointed that this hope has not been delivered on, yet.

In 1968, the concentration of CO2 in the Earth’s atmosphere was about 320 parts per million — already significantly above levels experienced by any human civilisation, along with the increases in global average atmospheric temperatures and sea levels that go with elevated CO2. 50 years later, our planet’s atmosphere is 410 ppm CO2 and this is still rising. The record-breaking temperatures, sea levels, ocean acidity, habitat destruction and species loss all also keep on rising.

This is all uncharted territory, as was the space between Earth and our moon before 1968. The Apollo 8 crew’s expedition was a mission of firsts, and so is ours. They came back with a new way of seeing our world, and we also have to find our own and to deliver on the hope that Borman, Lovell and Anders found in a place that’s the furthest from home that any human had ever been or has been since. There is no other home.

It’s worth watching the film for the words of those three men then and now as much as for the images, and I’ve avoided quoting them here in the hope that you will go and watch it for yourself. But here is one to end with, which speaks to the power of imagination and of art of all kinds to trigger imagination at individual and collective scales, and to inspire new hope:

“The photograph itself was the thing that everybody liked. I mean it represented Apollo 8. And it could be almost like saying it was the fourth astronaut, because it was there and it did the job. One frame had showed exactly our existence.”

Earthrise (2018) by Emmanuel Vaughan-Lee is available to view at the Global Oneness Project, of which Emmanual and Cleary Vaughan-Lee are directors. You can also download a series of school and university level discussion guides about the film, and their other projects.

You can find Time and Tide, my previous post for this series on the Gifts of Sound and Vision page, where future contributions will also be collected as part of our Curious Minds section.