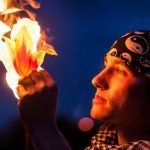 Writer Philip Webb Gregg embraces our Environmental Keywords theme on Transitions with an urgent call to abandon our language of endings for one of beginnings, where we embrace the deepest change: a radical transition to more honest stories.

Alright, I have a confession, and I’m aware this is an uncool thing to say, but I no longer believe in the end of the world.

Shocking, I know. Especially coming from me. I’m exactly the kind of person you’d expect would think the apocalypse was just around the corner. After all, I’m a second-generation activist (my mother baked bread at Greenham Common). I’ve done all the usual things; camped at the capital, given out endless leaflets, hurled abuse at the gates of Parliament with the best of them. Moreover, I’m a white, straight(ish) man with long hair, stick-and-poke tattoos on my forearms and a steady yoga practice. Of course I should believe in the imminent end of the world. Except I don’t. Not anymore.

I used to. I grew up in an alternative anarchist community on the southernmost tip of Europe. In some ways, it was a happy and unremarkable childhood, but in others I have learned it was quite unique. For instance, we took for granted that the world was ending. It didn’t matter how. Could be nuclear, could be another world war. The point was, I and all my friends — and all our parents — were basically futureless.

We made no five-year goals. There was never a whisper of career paths or pension plans, or even what we’d do next week. Instead, we had fun. We used the minimum effort possible to make us as happy as possible for as long as possible, until it all fell inevitably apart. In some ways, this is good for the soul. It has certainly given me an appreciation for the honesty of the present moment –- more on that later. But it also means I grew up in a world and a community that had doom on its lips.

The end of the world, as we know it

So believe me when I say I understand what so many of us are going through. Call it apocalypse-anxiety, or climate-anxiety, what it amounts to is fear, dread; the empty, heavy feeling in your stomach when you see the world changing around you. When you read the science, watch the news, walk across the dead grass.

It is too easy to be seduced into the ‘last days of Rome’ metaphor. That we are Troy before the horse, Atlantis before the flood, Pompeii before the fire; living on a cliff edge with hyper-luxury behind us and the apocalypse ahead. All of this is very poetic and compelling, but ultimately inaccurate and unhelpful.

Because, like it or not, tomorrow is coming. And it will not be the end of the world. It will just be a day, in many ways much like any other.

As I write this, I can hear the voices of my family and friends gesturing frantically to their browser screens, their Facebook shares, the dry heat in the stale air. Yes, mass-disaster, societal collapse and global meltdown are already happening. Riots and starvation and power-outage are very likely in many parts of the world very soon. In other parts, they are already underway. And they are awful and inhuman and entirely avoidable. But these are symptoms of drastic (and reversible) change, not the apocalypse. And that knowledge changes everything.

The point of all of the above is simply this: believing the end is nigh is a forgivable form of cowardice. It excuses you from the hard work of tomorrow in favour of the pleasure, or the despair, of today. Instead I have a radical proposition worthy of the anarchist roots that bred me. I propose we embrace change, on all fronts and at all costs.

Because despite everything I have said, we are in the deepest trouble, and we need the deepest change.

Some of this change may involve stepping forward, into what feels like an abyss. Some of it will likely feel like a step back into the past — the way things were in the ‘good ol’ days’. Most of it, I hope, will be more of a step sideways. Neither demonising the future, nor glorifying the past, but simply being more present, honest now.  Why do I use the word ‘honest’? Because I think that’s at the root of the change we need.

Imagine, for a moment, that you were alive a thousand, or two thousand years ago. I think it is unlikely that you cared about ‘the planet’. Almost certainly you cared about the weather. And the soil. And, in some form, the wild. Most likely you spent your days hacking away at it, fencing it, herding it, milking it, eating it, and your nights hoping it wouldn’t eat you or your loved ones.

Give or take, that’s been the case for all of human existence. Throughout our entire collective evolutionary journey, we have not had to worry about overwhelming or choking our ecosystem in the way we do now (this is one of the reasons it is so goddamn hard to get your head around the idea of the Anthropocene). But there is another staggering change that goes hand in hand with that transition. That of honesty. Truthiness. Verisimilitude. Call it what you like, we’ve lost it.

Sometime in the last few millennia, I believe we have learned to lie to ourselves about nature, and the nature of ourselves. Perhaps it happened the moment we overstepped our place in the food chain; began looking at the natural world as a thing separate, and beneath us. Maybe it started with the invention of fiction — that most essential and deadly of human tools — and the creation of the written word. Who knows?

All I know is that these days I see it everywhere. And the reason that these times — our times — feel like the ‘end-times’ is because they are the apex of this dishonesty.

For me this is the core of the crisis we face, and the hinge on which our change must turn. I do not point to technology or colonialism or capitalism, though those are certainly factors, I point instead to the myths we tell ourselves. The stories, if you like, that we have built our lives upon; our cities, our skyscrapers. Stories of eternal progress, of the singularity and the isolation of the individual. We have grown so accustomed to deception we no longer see the bullshit we swim through every day. These things take us away from what we are, and have become the cause, either directly or indirectly, of the climate and ecological crisis we are facing today.

Because really, that’s all that nature is: an honest thing. Nature is not flowers, rivers and butterflies. Sure, those things are an aspect of the natural world, but so are carnivores, rotting flesh and landslides. My point is the natural world is not a pretty or easy thing — most of it is uncomfortable, harsh and dangerous. The very opposite of our lives now. But it doesn’t lie to you. It cannot; it simply is.

And really, so are we. When we strip away all the lies we clothe ourselves with, we are still the same scrabbling figures we were two thousand years ago, except that now the weather and the soil and the wild are all going missing and we’re left wondering what on earth is next.

Well, truthfully, I have no idea. But that’s what we’re here to find out.

If the gift of my upbringing taught me anything, it’s how to call bullshit on a world that just wants you to shut up and buy stuff. I think we need to stop being passive members of a society that’s actively slipping into chaos. We must make an effort to step away from the language of disasters and step instead toward the language of new beginnings.

I think we need to speak, and speak honestly, and tell new stories, honest stories; not just to each other, but to ourselves. And yes, in some non-hippy way, to the world as well.

Philip is an editor for the Dark Mountain Project, working on several of its volumes — including the forthcoming Issue 22: ARK, which is published this October.

You can read Deconstructing our Dominion Stories in a Time of Unravelling, the recent review by Joan Sullivan of two new books by the current co-editors of the Dark Mountain project, Nick Hunt and Charlotte Du Cann, and the project’s themes have also come up in several other posts, for example Conversations with Work That Connects, featuring six ClimateCultures members in wide-ranging conversations on their creativity in dark times.

Philip’s previous ClimateCultures posts include Rewilding – Slantways: an original poem exploring rewilding as a sideways step into a stranger world, resisting simplifications of ‘progress’ and the gains and losses of our current model, even as we seek to change it.

Scroll down for  Comments on this post — and add your own!

A writer of ephemeral things for beautiful places, exploring the disconnect between human nature and nature nature, and grappling with themes of faith, folklore and narratology.
Read More

2 thoughts on “The End of the World? Let’s Be Honest”