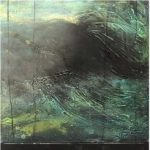 Visual artist Mary Eighteen updates us on work that imagines a world where the ocean is on the trajectory to extinction. Here, Mary focuses on concepts of ‘framing’ as a means to provide the visual encounter with abjection.

Mary introduced her collaboration on this project with multimedia artist and fellow ClimateCultures Member Julien Masson in her post The Ocean as Abject: Between Seduction and Defilement.

Our project is ready to launch in terms of seeking the correct exhibition space. The appropriation of Kristeva’s abjection, by reversing the abject as human trauma and positing it within the world of oceanic trauma, remains central to the work.

When preparing or proposing ecological scenarios for an exhibition that invites the spectator to view and consider the abjection of our oceans, it is important that our frame itself also challenges the oceanic problems facing humanity. Both of us have explored this in relation to the idea of the architectural space provided for our proposed exhibition.

The viewer and the frame

Our further research into spectatorship, regarding the viewer and the frame, responds to Paul Sharit’s concept of “presenting and viewing a film as close as possible to the conditions of hanging and looking at a painting.” (1) Therefore, for The Ocean as Abject, I have as a painter responded to a process of painting as installation, so that spectatorship is addressed not as an observational exercise, but as a concept of thought in terms of viewer participation. To this end the viewer is invited to contemplate both video and painterly installation within the structure of the frame.

In my previous post I presented my painting Abjection 1 and said:

“I have produced three further paintings which are narrow (70cm wide), and in two vertical sections. With a nod towards installation the paintings will each sit on a set of steps that will be in line with the canvas and flush with the wall.”

Since then the steps have been made and suitably sprayed black with car spray paint.  It can be seen from the images here that the paintings aligned with the steps are moving towards installation. The steps are symbolic of a possible sixth extinction, and of the steps we need to make to prevent such an occurrence. The frame therefore challenges spectatorship on two levels. The steps incite interest by deconstructing formal notions of the frame. In doing so, the viewer is invited to question further the purpose of the artwork. Subsequently they must consider the powerful insights evoked by the exhibition.

Abjection: steps to the future

The three paintings — Abjection 2, Abjection 3, Abjection 4 — are the beginning of a body of work that embraces this notion of the frame. While the top smaller sections on all three (70cm x 60cm) make a reference to landscape, albeit in an abstracted manner, the lower long canvases (70cm x 122cm), suggest a disruption of flow that symbolises a world where meaning has started to collapse. The steps are a prelude to that plausible collapse and invite the spectator to consider this conundrum. They make reference to both ecological concerns as well as exploring the art object in relation to the frame.

While the paintings — unlike video — are static, the steps are a move away from the manner in which a canvas is so often traditionally presented. This could be further investigated by also interrogating the way in which painting can be displayed on a wall. After his death in 2015, Ellsworth Kelly’s last paintings were exhibited at Mathew Marks Gallery in New York (May 5th to June 25th 2017). In his critique of the exhibition, Terence Troullot shares Branden Joseph’s quote on the artist, “The wall is part of the painting and always has been.” (2) Troullot’s own summary of Kelly’s painting White Diagonal Curve (2015) suggests that “a crescent shaped white canvas set against an all-white partition wall, seems to be part of the background, and yet escaping from it as well, outwardly moving in all directions.” (3) In relation to Troullot’s observation The Ocean as Abject makes it essential that frame as well as painted image emanates the idea of a sullied ecology. This is to ensure an enlightened spectatorship, by presenting painting via a disrupted surface that not only interrogates the viewer but also the architectural space within which it is exhibited. By ‘disrupted surface’ I mean that, in my case, the nature of displaying a painting is challenged by the addition of the steps.

Similarly, Julien Masson’s video for The Ocean as Abject (which can seen in the earlier post) was initially presented as a concept in three parts. It was suggested that the video would work well as a series of slow panning shots stacked (in strata), on one screen or in succession. This makes me think of montage and the whole idea of assembly or editing. In his thesis Eisenstein’s Theory on Montage and Architecture Jeffrey M Todd states that “Montage then deals with the combination of several dissimilar elements which through their assemblage establish new meaning “(4) For me this statement elaborates the purpose of our proposed exhibition. The Ocean as Abject juxtaposes painting and video for the purpose of evoking an ecological awareness for the spectator, and this assemblage as installation uses the designated architectural space to convey meaning and purpose via the frame.

“If as Eisenstein suggests, film and by extension, moving image installation descends down one line from architecture, then another branch must necessarily proceed from painting, that other creature of duration.” (5) Within the historic links of architecture and painting, punctuated by the more recent mercurial rise of video art and installation, The Ocean as Abject will in the end be defined by the architectural space provided. Within this space, spectatorship must then focus on the frame in order to transcend the meaning and purpose that lies beyond the frames presented.

Together, Julien and I have created work that aligns a relationship between video and painting, but we have also considered work that has the flexibility to relate to the architectural space that it will be exhibiting in. In her book Installation and the Moving Image, Catherine Elwes says “There are obvious continuities across both practises arising from formal considerations — both moving image and painting organise pictorial elements: shapes, textures, colours, light and dark into readable signs, for the most part defined by the frame.” (6)

Two artists — one a fine artist and painter, one a multimedia artist whose work straddles both video and the visual arts — have addressed how the frame can be used to heighten awareness of the worrying conditions that are affecting the survival of our oceans’ future, and in turn our own.