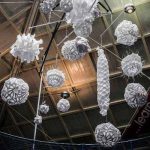 Collage, sculpture and video artist Julien Masson collaborates with researchers in a dynamic dialogue between digital technology, science and arts to explore coccolithophores: tiny, photosynthetic marine lifeforms with an important role in our planet’s oxygen and carbon cycles.

This art installation, funded by Arts Council England, for the atrium of the Winchester Science Centre and Planetarium takes the form of a cascade of sculptures representing the micro plankton coccolithophores. This figurative work is constructed from carved opaque recycled milk bottles, a method we have used on previous projects. In interpreting the architecture of these microscopic creatures I hope to stimulate both scientific and artistic enquiry. Approximately 1,000 high density polyethylene (HDP) milk bottles will be used to create a series of scaled up Coccoliths.

I partnered with local sculptor and recycling artist C. Cudlip on this project and we were very lucky to be able to work with Dr Samantha Gibbs, Royal Society University Research Fellow within Ocean and Earth Science, National Oceanography Centre Southampton at the University of Southampton. Dr Gibbs provided us with invaluable information relating to the science of the coccolithophores, reference images and advice on how these unicellular phytoplankton are formed and worked with us on outreach events to present the subject to the wider public.

Coccolithophores have an important role in the carbon cycle of our planet. We were very keen on a project that would not only have an artistic dimension but also have scientific and educational connotations.

We proposed to produce a cascade of coccolyths made of recycled milk bottles to recreate the shells of these creatures. In using this throw away material we wanted the public to be aware of the environmental and ecological impact we are submitting our planet to.

Coccolithophores are tiny marine lifeforms called micro-plankton. Measuring just a few microns across, they are made up of smaller sections called coccoliths. The living coccolithophores form into layers called blooms, spanning hundreds of miles of ocean.

These photosynthesise and act as one of the planet’s most important sources of oxygen production. The fossilised remains of these creatures create a vital form of carbon capture, locked into the calcium carbonate of their skeletons.

Next to the rainforests, coccolithophores are one of the biggest producers of oxygen on the planet. Coccolithophores also have an effect on the carbon cycle. The production of coccoliths requires the uptake of dissolved inorganic carbon and calcium. Calcium carbonate and carbon dioxide are then produced from calcium and bicarbonate by the following chemical reaction:

Because coccolithophores are photosynthetic organisms, they are able to use some of the CO2 released in the calcification reaction for photosynthesis [2]. During calcification, two carbon atoms are taken up and one of them becomes trapped as calcium carbonate. This calcium carbonate sinks to the bottom of the ocean in the form of coccoliths and becomes part of the sediment; thus, coccolithophores provide a sink for emitted carbon, mediating the effects of greenhouse gas emissions [3].

In 2012, it was estimated that there was approximately 165 million tons of plastic pollution in the world’s oceans. Polystyrene pieces and nurdles (manufactured plastic pellets used in the creation of plastic products) are the most common types of plastic pollution in oceans and, combined with plastic bags and food containers, make up the majority of oceanic debris. The Marine Conservancy has predicted the decomposition rates of several plastic products. It is estimated that a foam plastic cup will take 50 years, a plastic beverage holder will take 400 years, a disposable diaper will take 450 years, and fishing line will take 600 years to degrade [4]. The decomposition rate of plastic milk bottles is also estimated several hundred years in a landfill [5].

Discover the biodiversity and taxonomy of coccolithophores at the Nannotax site.

Read about plastic pollution of the oceans at the Coastal Care site.

Compare the environmental impacts of different types of milk container in this article by Brian Palmer in the Washington Post.