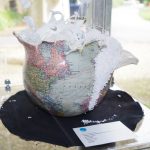 Environmental artist Linda Gordon reflects on a recent exhibition she contributed work to, where artists responded to the documentary ‘A Plastic Ocean’, and the issues of plastics pollution of the oceans that produced such a diversity of art.

A couple of months ago, members of North Devon Arts viewed the film A Plastic Ocean, the documentary directed by Craig Leeson, which investigates the dangerously escalating problems relating to plastics production and disposal — particularly the horrific amount that’s continually being dumped in our oceans. We decided that ‘A Plastic Ocean’ was going to be the theme for our annual Summer Exhibition.

We were to limit dimensions of 3D works, and the width of 2D works, to one metre. Given these constraints, when I saw the final results, I was amazed at the huge variety of approaches, in terms of both the art-making processes as well as the exhibition theme itself. Each work was as unique and special as the person who made it. From abstract to origami; from small sculptures to traditional seascapes with something not quite traditional about them.

Here I have arbitrarily picked out a few contrasting pieces, to give you a flavour of the show:

‘You can’t even cry, because you don’t even care’  – Fiona Matthews

A globe of the world is burst and torn asunder with a mass of plastic spewing up from its innards. Prominent amongst this are hundreds of little white plastic pellets, the ones that sea birds mistake for fish eggs, and feed to their chicks. Like several other works in the show, the beauty of this piece made it all the more chilling.

Jann is in the habit of collecting and disposing of all sorts of plastic that has been dumped in the river near her home. This of course is bound to disintegrate and make its way towards the sea.

Peering into the beautiful blue watery background of ‘Fertile Valley’, among the drifting debris, I was able to pick out a glyphosphate (herbicide) container and a fragment of old plastic feed bag, all falling slowly downwards, together with scraps of printed warnings about their potential dangers. Mixed up in all this were barely visible ghostly water creatures, a vital part of our food chain – all sinking back into oblivion as though they had never existed.

Robin has used tantalisingly attractive, but potentially toxic materials for this powerful painting. It refers to the massive quantities of discarded plastic carried by ocean currents, and continually congregating in mid ocean to form what we now know as ‘Garbage Islands’. (The most notorious of these is, of course, the Great Pacific Garbage Patch, details easily found on the internet.

By contrast, Paula has specifically chosen environmentally-friendly materials only for this tranquil view of a well-known local beach scene: looking across Bideford Bay from Crow Point towards Northam. Looking carefully, I was able to pick out a number of coloured bottles, half-buried amongst the shingle.

Paula is a member of the Marine Conservation Society, and took up their challenge to go for 30 days without the use of single-use plastic. Needless to say, she — and I am sure many others — failed. Paula’s second exhibit, carefully presented in a Perspex display cabinet, is a plastic bottle overlaid with a multitude of colourful scraps from all the plastic she was unable to avoid.

An image of me, crawling out of the sea, tangled up in plastic beach litter that I had collected and strung together. I carried out this performance some time ago, but felt it relevant to extract and print this single photo from it.

During the Preview on the Sunday afternoon, I found myself drifting in and out of several spontaneous and animated discussions around the appalling problems that we humans have created for ourselves, relating to the worldwide use of plastics.  The exhibition as a whole, seemed to trigger a strong and instant response in people to these issues.

Not only that, but when I returned a couple of days later to take photographs, a couple of visitors walked in and immediately engaged me in conversation about this whole topic. I was happy to be able to add a little bit more information to what they already knew.

All art works © as shown; all photographs © Linda Gordon 2017

For me, this excellent and unassuming exhibition shows the power of art to elicit an authentic response; to move hearts and minds; to get people talking, and to encourage commitment to the true realities of life. Hopefully this awareness will continue to spread and get the issues talked about, and help turn things around – for the sake of ourselves and future generations.

North Devon Arts is “a friendly and informal network of professional and amateur artists and anyone with an interest in the arts across North Devon.” For information – Members of the Committee are listed on the website Contact Page, together with their email addresses. The exhibition is at Broomhill Art Hotel until 2nd September.

You can see a clip of Craig Leeson’s film A Plastic Ocean and find out about future screenings, how to arrange a local screening and help make its campaign, We Need a Wave of Change, a global movement. The site also has plenty of information on the issues and updates on projects by the charity, Plastic Oceans Foundation.

You can find out more about the Great Pacific Garbage Patch at Wikipedia, and this short and very interesting podcast from NOAA (the US National Oceanic and Atmospheric Administration) explains what an ocean garbage patch is and isn’t, how they form and what we can do about them.

The Marine Conservation Society has extensive information on many aspects of the marine environment and, as Linda mentions, sets us a plastic challenge to see how long we could give up single use plastics: how long can you last?

An environmental artist making temporary works in the landscape as a way of re-connecting with life’s endless processes and essential unity and sharing this with others.
Read More