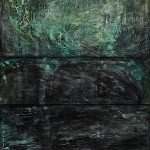 Fine artist Mary Eighteen and multimedia artist Julien Masson collaborate in painting and video, to explore the space between seduction and defilement in a world where meaning has broken down in relation to ecological protection of our oceans.

As well as researching Benthic Communities in the Shelf Sea, as mentioned in my last blog (have started the first painting, which I will include for discussion in another blog), I am working on a collaboration with the UK-based French artist, Julien Masson. Our project is called The Ocean as Abject. This collaboration seeks to explore the space between seduction and defilement in order to present an exhibition that is ‘A Visual Encounter with Abjection’. In essence, this is at the moment a research project and we hope that when an exhibition site is agreed and formulated, there will be an essay and accompanying information for visitors to take away with them. We would also like to hold a symposium, where a mix of backgrounds – from cultural and ecological, to visual and scientific – could ask questions and provoke a debate.

The proposed exhibition, The Ocean as Abject, presents a world where meaning has broken down in relation to the ecological protection of our oceans. With rising C02, ocean Dead Zones and ocean suffocation, human existence is under threat; the sad reality is that we have done this to ourselves. The seduction of the ocean has reversed to defilement by our lack of thought and our own self-inflicted banality. The essence of The Ocean as Abject invites viewers to imagine a world where the ocean, as we know it, is on the trajectory to extinction. Both painting and video are presented together, to accentuate this experience.

The exhibition will re-evaluate the notion of abjection perpetuated by Julia Kristeva, the French/Bulgarian philosopher, literary critic and psychoanalyst, who is Professor Emeritus at the University of Paris Diderot. In 1980 she published Powers of Horror [1]. In this essay, Kristeva refers to the abject in relation to mankind and the body. This could be migration, the humanitarian disaster that is the present famine in Somalia, or individual human trauma of any nature. However, our exhibition places the ocean as central to the notion of abjection. We take the stance that it is the ocean that is in trauma, and humanity has created this by a lack of human responsibility regarding our seas. In short, we have done this to ourselves and there is a reversal of roles as the abject is transferred from the person to the ecology of the ocean. It is human nature that is at fault and the environment that is in trauma. It could be argued that human nature also causes suffering to other humans. But that is not the argument in question here; it is the oceanic trauma that is central to the debate, and it threatens human existence. An ocean finally depleted of oxygen will survive on the planet in another form, but we as a race cannot.

Painting, video, and the frame

The essence of the frame has always been a commonality between painting, video and film [2]. The construction of composition, light and movement within a frame has fundamental similarities [3]. But of note is the relationship between the artwork and the architectural space within which it is exhibited. Julien Masson has produced a video called The Ocean as Abject, inspired by Acidification. The video is compartmentalised into three sections and, depending on the gallery space provided, can be projected in varied ways. To this end, the projection of the video is determined by the architectural space surrounding it. This clearly brings into force the extended relationship between painting, video and architecture.

Similarly, I have produced a large painting, Abjection 1, which is 230cm high by 190cm wide. Supporting this painting are three further paintings which are narrow (70 cm wide), and are in two vertical sections. With a nod towards installation, the paintings will each sit on a set of steps that will be in line with the canvas and flush with the wall. A gallery space will again determine how these are presented alongside the video. This further examines future possibilities wherein the steps are installed on the wall space and the canvas is on the floor. The steps alluded to are the steps we as a race are taking to our own ecological annihilation. But equally it could be video projected onto the floor! The possibilities are in profusion. Video’s transference qualities are endless. A video can be projected onto the outside of a building, or used as a light installation. The subject of ‘process’ is present in both video and painting. The end product of painting is static, although the process has much movement, while a video is a moving image that involves a different kind of process.

In summary, The Ocean as Abject is an installation of painting and video destined to be curated in relation to the architectural space provided. The collaboration brings together a multimedia artist with an interest in the Anthropocene, and a painter with ecological interests who would also like to extend painting into installation work. Central to The Ocean as Abject is the need to accelerate public awareness of the seriousness of the problem regarding our oceans. To support this notion, the writings of Julia Kristeva’s abjection have been explored and appropriated, placing the abject firmly within the realms of the oceanic cultural dilemma of our time. Our planned exhibition directly confronts the problem, and we want talks and discussions to bring the debate to as many of the public as possible.

References for the text:

2. Elwes, Catherine: Worrying the Edges of the Frame, in Installation and the Moving Image, Columbia University Press 2015

Julia Kristeva’s Jackson Pollock’s Milky Way, appeared in Journal of Philosophy and the Visual Arts (Academy Group, 1989) and there is more at the website Julia Kristeva.