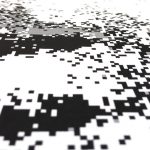 Visual artist Rebecca Chesney, whose location-specific work is informed by her research and conversations with scientists, describes her experiences of drought and tree death in California while on a residency and shares some of the images she produced.

I am a visual artist based in Preston, Lancashire. My interests lie in how we perceive the landscape: how we romanticise and translate our rural and urban surroundings; how we define, describe and categorise nature. I look at how politics, land ownership, management and commercial value all influence the environment we live in. Air pollution, water quality, invasive plant species, weeds, bees and weather are all subjects my work has dealt with previously, with the results taking the form of installations, interventions, drawings, maps and walks.

In 2016 I was invited to attend a residency at Montalvo in California. At that time California was experiencing one of the most severe droughts on record. Having just finished a winter here where storms Desmond, Eva and Frank had caused extensive flooding in Lancashire and Cumbria, I was interested in looking at extreme weather episodes and learning more about how climate change is affecting different geographical sites.

Split into two trips, my first visit in September 2016 was five years into the drought.

Situated an hour south of San Francisco, Montalvo sits on a hillside surrounded by redwoods and oaks. The river running through the site had long since run dry; the warm air, sweet with the smell of the gigantic redwoods, was full of dust. My visit coincided with the run-up to the presidential election, which became a frequent topic of discussion amongst the staff, other residents and locals alike with the majority agitated, nervous and deeply concerned about what the future might hold.

Dry river beds, reservoirs at historically low levels and the outbreak of wildfires nearby all revealed the extent of the drought, but it was the sheer number of dead trees on the hillsides in Yosemite National Park that I found completely overwhelming. I saw thousands and thousands of dead trees. The continued drought and subsequent increase of bark beetle attack had resulted in huge losses: the US Forest Service estimated a loss of 66 million trees in the Sierra Nevada in 2016, with the most vulnerable species being Ponderosa Pine, Incense-cedar, Sugar Pine and White Fir Trees.

During my travels, I started to make drawings in my sketchbook of the exit holes of the bark beetles found on dead branches and tree trunks. I was drawn to the random patterns made of tiny holes, singly meaningless, but collectively devastating. And with these drawings I embroidered fabric with the patterns of dots, each individual mark taking time to create.

Returning from Yosemite National Park my journey took me through the vast agricultural Central Valley. The nation’s leading producer of almonds, avocados, broccoli, grapes, peppers and many other crops, this highly managed area is in stark contrast to the native forests of the mountains. Almonds are California’s most lucrative exported agricultural product: jobs and livelihoods depend on their success. However, almonds alone use approximately 10% of California’s total water supply. It was not difficult to see that thirsty crops in a time of drought can present difficult dilemmas and make us question our priorities.

The time between my first and second visit to California brought many changes. On my return in spring 2017 Trump, elected and sworn in as President since my first trip, continued to be the main focus of intense discussion and deep concern: he had already withdrawn from the Paris Agreement. The drought had been declared over, with above average rainfall and storms over the winter months resulting in numerous landslides and local road closures around Montalvo. Further south, the Pfeiffer Canyon Bridge on Highway 1 was damaged beyond repair, with the extreme rainfall causing it to crack and sink on the shifting mountainside. With no option but demolition, it is expected to take over a year to replace, and with no detour available it leaves communities and businesses cut off and isolated.

During my second trip I was invited to meet Ramakrishna Nemani, a senior earth scientist at the NASA Ames Research Center, and Professor Eric Lambin at Stanford University. Nemani’s research uses satellite and climate data to produce ecological nowcasts and forecasts, while Lambin’s research is looking at land use change using GIS, remote sensing and socio-economic data. Providing an insight into these complex subjects, both meetings helped me understand the complex layering of issues involved and the need for balance within ecosystems.

I was also able to attend a Sudden Oak Death bioblitz workshop with Matteo Garbelotto from UC Berkeley. Caused by the microscopic pathogen Phytophthora ramorum, Sudden Oak Death (SOD) is an exotic disease introduced from an unknown region of the world into California 20 – 25 years ago. During the workshop I learned how to ID the disease and was asked to collect leaves from Californian Bay Laurel trees. Although carriers of the disease, Bay Laurels don’t die of SOD; however they infect surrounding oak trees that do die from the disease. I enjoyed being involved in the bioblitz and learned a lot about the complicated relationships between humans and the environment and the consequences of tiny imbalances in nature.

Continuing on from my sketches and embroideries about tree loss in the Sierra Nevada, I used data supplied by NASA satellites to produce a series of prints. Showing tree losses caused by the drought, bark beetle attack and wildfires in the last four years, the resulting images look like maps of swarms: intense and dark in places, sparse in other areas. Where the embroideries (Near) show individual minute dots, the prints (Far) reveal kilometre upon kilometre of dead trees visible via satellite.

The small made large

Now back in Lancashire, I have had time to reflect on what I learned from my trip to California. Although different in so many ways, both regions are similar in facing increased pressure from the changing climate.

I saw how even the slightest shift in the balance of nature can have a huge impact on the health of ecosystems: seemingly minute actions we make have consequences. I saw how the economics of land influence decision-making and often take priority over the conservation of natural heritage. And the political uncertainty and upheaval added a new dimension from which to experience the situation. This amazing opportunity to visit some incredible places and meet world-leading experts all contributed to a fascinating trip that will continue to influence me and my work into the future.

Rebecca’s images of Near / Far have been published in Uniformannual Twentyeighteen, available from Uniformbooks: 124 pages with contributions from 24 writers, artists and researchers. Rebecca’s trip was supported by Arts Council England and Lancaster Arts.

You can explore the work of the Montalvo Arts Center at their site.

The problems and management of Sudden Oak Death in California are described at the site of the California Oak Mortality Task Force. And the Firewise Madera County site has a well-referenced article on the dangers of Bark Beetle attack on the state’s trees.

Want to know more about ‘bioblitz’? Have a look at the European Citizen Science Association’s Bioblitz Group and the UK’s National Bioblitz Network.

Rebecca mentions Eric Lambin’s research; his 2012 book An Ecology of Happiness looks like an interesting read.

A visual artist interested in the relationship between humans and nature, how we perceive, romanticise and translate the landscape and our influence on the environment.
Read More