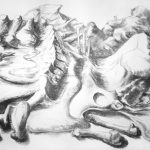 Artist Jo Dacombe explores sense of place, layers of history and the power of objects. Jo describes her work with museums and researchers on visual art inspired by relationships between bones and landscapes, now and into the future.

I often consider the continuum of time, and how the present is part of the past and the future, one influencing the other, both forwards and backwards. Commissioned by Leicestershire Museums to create Myth Maps in 2011, in my proposal presentation for the project I drew a timeline on a sheet of transparent acetate. I held this up and explained that we experience time in a linear way, because of the way we think about it (by ‘we’ I refer to Western thinking; there are other ways of perceiving time, such as cyclical time; perhaps a subject for a future post). Then I folded up the timeline, so that you could still see the line but now it was concertinaed onto itself, and different parts of the timeline could be seen in the same place, one on top of each other. This, I explained, is how time is contained in a landscape.

This happened before I came to work with archaeologists, but I believe was probably the beginning of that particular thread of interest. In 2014 I became Artist in Residence in the School of Archaeology and Ancient History at the University of Leicester; however, I was working with zooarchaeologists in the Bone Lab and looking at animal bones rather than at landscapes per se. But throughout the residency, it became clear that landscape, bones and animals (including ourselves) cannot be separated out so easily.

In looking back at archaeological landscapes, we also begin looking forward to what archaeology of the future will perceive of our time now. What will be the future fossils?

Working with archaeologists, my perception of landscape has become framed by the idea of time past and time future — a time continuum that all landscapes contain; in fact landscapes are a manifestation of time, formed by aeons of material shaping and movement.

Jan Zalasiewicz writes of the Technosphere, an era where our mass-produced technological objects will clutter up the world and end up as strange fossilized shapes in the future. He has created examples of what these objects might look and feel like. He tries to imagine how our technological world will shape the stratigraphy of the future. Zalasiewicz, Professor of Palaeobiology at the University of Leicester, is both studying fossils from the distant past and imagining future fossils. Again, looking back is looking forward.

However, there is another and perhaps more profound change in the landscape that we are creating now. A change that is more directly linked to our bodies, and draws on the interrelationship between ourselves as material beings in a material landscape, and our modern world of mass production. It is to do with our mass production of food and how this affects what our bodies are made of.

During my work with the University of Leicester, zooarchaeologist Dr Richard Thomas and others proposed the idea that one of the markers of the Anthropocene that future archaeologists will discover will be broiler chicken bones. The broiler chicken has a skeleton that is vastly accelerated in its growth, genetically engineered to reach huge proportions within a short life span in order to feed ever-increasing human populations across the world, cheaply. As he explains, there will be thousands of millions of broiler chicken bones deposited into the landscape over our time:

Over 65.8 billion meat-chicken carcasses were consumed globally in 2016 and this is set to continue rising… The contrast between the lifespan of the ancestral red jungle fowl (3 years to 11 years in captivity) and that of broilers means that the potential rate of carcass accumulation of chickens is unprecedented in the natural world.

I cannot imagine the piling of chicken bones of that scale, even for only one year of consumption. But humans have been eating animals and leaving their carcasses and bones for many centuries, and we do not find our landscapes overrun with bones because they decay and return to the earth. Won’t this happen with chicken bones too? Perhaps not, because our way of disposing of so much rubbish has changed; we put this in landfill, piling up all our waste in one place, which changes the way that they degrade. As Cullen Murphy and William Rajthe have written in Rubbish! The archaeology of garbage, “organic materials are often well preserved within landfill deposits, where anaerobic conditions mean that bones ‘do not so much degrade as mummify’”.

How will this shape a landscape? I imagine future fossils of boulders created from the shape of broiler chicken leg bones. A lump of stone with jutting humerus shapes rippling across its surface.

Bodies as bones as landscapes

In working with Richard, I came to realise that landscapes and bones, and therefore us, are inextricably linked. When we die, we become deposits in a landscape, and our bones become part of the layers in the earth. But before that, our bones are created from our environment; the minerals within the food and water we eat drink and in the landscapes that we inhabit, actually create our bones. Archaeologists can work out the location of where an animal or human has been living by analysing the isotopes contained in the bones that they excavate. We are, in fact, a part of our landscape in a material way, not just a spiritual way.

This idea became two drawings that I created for The Reliquary Project exhibition in 2016: Bone Landscape and Bone Forest. Although the project studied archaeological animal bones, I don’t recognise a difference between humans and animals on a material level, and so my two drawings relate humans to landscapes too.

I tried to make stone bones. I cast bones into reconstituted stone, to think about how a fossil is a material transformation of an object. Making a cast is like making an instant fossil. The rather beautiful quality of a bone, the smoothness and whiteness of chicken bones, which are like silken tools in my hand, are completely lost when they become stone. The stone bone is a bit of a monstrosity. Its surface is odd, its weight is wrong, and it seems to have a material permanence that bone does not. I imagine these stone fossils stacked to the height of a landfill deposit, one day to be excavated by future archaeologists as they pick through the sky-high garbage left behind by our epoch.

We are reshaping and reconstituting our landscape by the deposits that we make, including broiler chicken bones. But by doing this, perhaps we are reconstituting ourselves too. As our environment changes, how will we evolve as a part of this interconnected recycling of material that is the process of life, death and landscape?

Future landscapes will be made of bones, and our bones are made of our landscapes… As our landscapes become transformed by the plastic and metal remains of our technological objects, what will we become as animals living on and made from our landscapes?

The University of Leicester’s School of Archaeology and Ancient History Bone Lab conducts a range of interesting research projects, including the work led by Richard Thomas on the ‘rise’ of the domesticated chicken as humanity’s most widely established livestock species, and the proposal that one of the markers of the Anthropocene that future archaeologists will discover will be broiler chicken bones: The broiler chicken as a signal of a human reconfigured biosphere (published in the Royal Society’s journal Open Science, Dec 12 2018).

Jan Zalasiewicz’s writing on the Technosphere includes The unbearable burden of the Technosphere (published in UNESCO’s journal Courier, 2018): “In the geological blink of an eye, a new sphere has emerged, and is evolving at a furious pace. Weighing thirty trillion tons, this is the technosphere. It includes a mass of carbon dioxide which is industrially emitted into the atmosphere – the equivalent of 150,000 Egyptian Pyramids!” He also wrote A Legacy of the Technosphere (published in Technosphere Magazine, Nov 15 2016), with illustrations by artist Ann-Sophie Milon: “In the end, the technosphere will be buried deep as any other conglomeration of earthly materials, forming timelines of past eras as patterns on the face of cliff faces.”

Rubbish! The archaeology of garbage, by William Rathje and Cullen Murphy, was published by University of Arizona Press (2018).