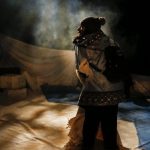 Dramatist Julia Marques introduces her research on the increasing interest in climate change within new drama, using visual discourse analysis to chart how the topics are addressed explicitly or form a backdrop to the world of the performance.

After much deliberation and changing of my mind, I settled on my dissertation topic; climate change theatre. More specifically, visual discourse analysis of climate change theatre. Who knew an MA in Climate Change could lead to a final project that allows me to go off in search of environmentally-themed theatre? I certainly didn’t.

How did I come to create such a topic? As our social research lecturer had predicted, it was not a linear route. I began by listing some of my interests with regards to climate change, and finally decided to incorporate one of my previous areas of study; Drama. What an exciting prospect! I had all sorts of ideas for my research. I was going to survey audiences at different climate change performances to garner their reactions. I was going to interview theatre-makers for the inspiration behind certain productions. I was going to conduct workshops using Theatre of the Oppressed techniques to explore the emotional responses to climate change. My research location moved from London, to the rest of England, to the UK, to even further afield. I started contacting people and groups in order to set up this elaborate operation. The wheels were in motion, the ideas were flowing, my days were filling up fast and . . . it was all getting a bit too much.

I took a step back and realised that there was so much which had already been created that warranted delving into. What about all the theatre that was being conceived right here, in London? What treasures there must be, just waiting for me to find them and write about them! Mixing drama and geography is not an altogether common occurrence in the arena of research. It is not often that you see academic papers that truly consider the arts. I was inspired by the “Four Cultures” idea put forward by Matthew Nisbet and colleagues in their paper Four cultures: new synergies for engaging society on climate change. In it they detail a new vision for the effective incorporation of the environmental sciences, philosophy and religion, social sciences and creative arts and professions. In light of this, and seeing as I hadn’t discovered a wealth of academics who do include the arts in their analyses, I decided to explore this for myself.

Why include the arts? For one, my MA is entitled Climate Change: History, Culture, Society. Culture, although a contested term, most definitely includes the arts – they are part of any culture. Similarly, society without drama, dance, art and music would be devoid of theatre, films, concerts, gigs, clubs and bars (unless they were sans music), television, parades, galleries, national anthems . . . the list goes on. In addition, I know that the arts have a lot to offer environmentalism, as environmentalism has to offer the arts. Indeed, many artists are very conscious of the issues facing our planet and all who dwell in it, and wish to contribute to the effort to help resolve these conundrums. There is increasing interest for creativity and imagination in the science world, in order to alleviate the situation, and this to me is an obvious appeal to the arts, which lives and breathes creative imaginings of the world. This is not to say that scientists and geographers are not creative, no! But this is a different type of creativity which the arts brings into the environmental sphere.

On commencing my search for plays that I would deem to be climate change-themed, I realised that there seems to have been a surge of new plays about climate change roughly between the years 2005 to 2013. This in itself is intriguing, but my mission is to find what I can see myself and thus be able to analyse. But what am I actually looking for? Climate change content, and the way the topic has been approached – is it overt? Is it implied? Is it the main theme, or a sub-theme that rumbles on in the background? Are the words “climate change” even mentioned?

I have ended up with a mixture of live performances and archival recordings as the pool into which I can dip my researcher’s toes. Once I have made notes on these, and featured them in a series of posts on my website, I can decide which (if not all) I will include in my final write-up of the fascinating area of climate change theatre.

As a postscript to this; I am keen to hear from anyone who knows of, or is involved in, any sort of climate change / environmental theatre. The bigger the pool, the more I can swim!

You can read the Open Access article by Matthew Nisbet and colleagues, Four cultures: new synergies for engaging society on climate change (Nisbet, M.C., Hixon, M.A., Moore, K.D., and Nelson, M. (2010), published in Frontiers in Ecology and Environment, 8(6): 329-331), and Matthew also has a post on the topic at Big Think: Scientist Urges “Four Culture” Partnerships on Climate Change Communication.

A climate change dramatist, activist and communicator specialising in social and cultural aspects of climate change who has worked in the nonprofit and media sector.
Read More