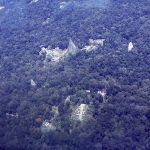 Anthropologist Lisa Lucero researches the emergence and demise of political power, ritual and water management among the Classic Maya. Her most recent project explores collapsed groundwater sinkholes for evidence of ancient Maya offerings and climate and landscape histories.

I’m walking through the humid tropical jungles of Belize, a small country in Central America where many more people lived in the past than today. As usual, I am not alone. I never go into the jungle without my Maya field assistants. Even with a GPS unit and compass, one can get lost quickly. The jungle is their backyard, and they know everything about it; their knowledge of wild fruits, berries, medicinal plants, building materials — it’s truly astounding. They also help me conduct my archaeology research — understanding how the ancient Maya sustainably lived for thousands of years in the face of two intersecting challenges: seasonal drought, and periods of climate instability. Too much or not enough rain was a constant, either short- or long-term, and yet the Maya persevered in the southern Maya lowlands (SML) of present-day Belize, northern Guatemala, and southeastern Mexico.

How did the Maya accomplish this? My research attempts to address this question because I know (not believe) that there are lessons we can learn from the Classic Maya (c. 250-850 CE) that are relevant today. Let me explain.

As an archaeologist, my role is to explore how our ancestors lived. When I was a graduate student at UCLA, I was interested in the emergence of hierarchical political systems. How did the earliest leaders get others to hand over the fruits of their labor? Many years and several publications later, what emerged was this crucial fact: climate change matters. No matter where or when in the world, climate change has played a significant role in shaping political histories. And it still does. I illustrate this point with a brief narrative on how Classic Maya kings arose and fell, and how the rest of the population adapted — and still do, as the millions of Maya currently living attest.

The setting. While the jungle may seem homogenous, it is not. The karstic topography gave rise to high biodiversity and a mosaic of dispersed resources, including fertile soils. This resulted in scattered farmsteads where the majority of Maya lived, as well as hundreds of urban centers with varying power based on agricultural surplus and water. While there was an abundance of rainfall during the annual seven-month rainy season, much of it percolated through the porous limestone bedrock. Surface water was thus relatively limited. Everything, thus, was rainfall dependent. Key factors so far: noticeable seasonality, high biodiversity, dispersed pockets of fertile soils, rainfall dependency.

It is this vital reliance on rainfall that is key to understanding the Classic Maya — their cosmology, agricultural schedules and strategies, livelihood, political power, and so on. The largest urban centers and concomitant support population and the most powerful kings emerged in areas with plentiful agricultural land, but without surface water such as lakes and rivers: Tikal and Naranjo in Guatemala, Calakmul in Mexico, Caracol in Belize, to name a few powerhouses. But, you might be asking, if the majority of Maya lived scattered throughout the landscape, how did kings get farmers to contribute their labor, goods and services? Such efforts resulted in what most people think about when the topic of the Classic Maya comes up — urban centers with palaces, temples, ornate tombs, massive open plazas, ballcourts, elaborate hieroglyphs, inscribed stone monuments, beautifully painted ceramics, carved jade, shaped obsidian, etc. The answer: water. More specifically, artificial reservoir systems that increasingly became interwoven not only with center design, but with political power.

During the agricultural intensive periods of the rainy season, farmers worked in their fields. In the dry season in areas without much surface water, they congregated at centers for drinking water. In exchange for access to water, Maya commoners/farmers maintained royal buildings and lifestyle; they also participated in public events and ceremonies sponsored by kings, met up with friends, bartered goods at markets, and so on.

This system was in place for nearly a thousand years in the southern Maya lowlands, beginning c. 100 BCE until c. 850 CE. By 900 CE kings had disappeared. There are two parts to address how their political systems ‘collapsed’: path dependency; and several prolonged droughts. ‘Path dependency’ basically is putting all your eggs in one basket; as financial advisors tell us: diversify, diversify. Maya kings relied on reservoirs to draw in their subjects who, in turn, funded the political economy. Thus, if reservoirs failed, so too did kings.

Maya: the end of power

Analysis of annual rings of speleothems (stalactites or stalagmites) from caves in the Maya area shows that several multiyear droughts struck the Maya area between 800 and 900 CE. They impacted everyone. Reservoirs dried up and, eventually, people abandoned urban centers and kings. While a minority remained in the interior southern Maya lowlands, former home to the largest and most powerful centers, most emigrated in all directions in search of water and other resources to take care of their families. They migrated along rivers, lakes and coasts. Maritime trade flourished, as did northern lowland centers. The northern lowlands, with thinner soils, make up most of the Yucatán Peninsula, which also is at a lower elevation; that latter feature exposes lots of accessible water in the form of over 7,000 cenotes or collapsed sinkholes that are fed by groundwater.

The southern Maya lowland centers were abandoned for good; hundreds of them. Kings lost power because they relied on reservoirs as the linchpin to draw in subjects. When reservoir levels dropped in the face of the multiple prolonged droughts, kings failed in upholding their duty to provide dry season water. Their subjects left. Perhaps if the kings had diversified their political portfolio…

So, what are the lessons? First, we can’t continue with things as usual if we want to substantially address issues wrought by our changing climate; this includes not expecting new technology alone to save the day; and second, life-changing adaptations are called for — for the sakes of our families.

More information on Lisa’s research publications is provided at her University of Illinois webpage, including open access journal articles such as a 2011 paper, Climate Change and Classic Maya Water Management and another excellent article Lisa wrote on the University of Illinois anthropology blog, Exploring Maya life.

You can find out more about Lisa’s and colleagues’ research at the website of the Valley of Peace Archaeology project.

A professor of Anthropology focusing on how Maya and other societies dealt with climate change: the emergence and demise of political power, ritual and water management.
Read More