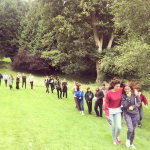 It is September 10th and I am sitting on a bench in the 40-acre bio-dynamic grounds of Hawkwood College in Stroud, looking out over the Severn valley. Ten remarkable theatre artists are sitting around me. We are here for a week-long Climate Lab on art and creative activism, which I have been part of setting up.

Last October I was a participant on the Julie’s Bicycle / PiNA Creative Climate Leadership training in Slovenia. A week of intense enquiry, coaching, educating and bonding with activists, policy-makers, artists and cultural leaders from across the globe, its impact was deep on all of us. The dissemination and outputs have been many. Climate Lab is one of them.

I am the Executive Producer at the Royal Court Theatre in London — a theatre with a solid commitment to artistic climate programming. Recent ecologically-tilted plays include Ten Billion, 2071, Escaped Alone, X, Human Animals, The Children.

I have also spent the past four years as Chair of London Theatre Consortium, where the Executive Directors or Producers of 14 London theatres gather quarterly to drive collaborative working and sectoral change. Our collective work, particularly around carbon and energy reduction (working with Julie’s Bicycle) and on workforce development (through apprenticeships and Executive Fellowships), has been significant and game-changing.

There were three of us from LTC theatres in Slovenia on the Creative Climate Leadership week — myself, an Artistic Director (Ellen McDougall from the Gate) and a Creative Learning Practitioner and artist (Dan de la Motte Harrison from the Young Vic). In a long lunchtime walk through the trees and seas and caravans, we committed to running a week-long climate lab for theatre artists when we got home.

We asked each LTC Artistic Director to nominate an artist to send — we were seeking a broad representative pool of emerging / establishing theatre artists — and we would invite extraordinary artists making work in this field to come and feed their brains and inspire their practice.

The steering group had a series of wonderful, rigorous, effortless, ambitious meetings from January 2018, made a (successful) Arts Council application, and with the incredible support of Hawkwood College (a Centre for Future Thinking) and their Artists Residency Programme, the Climate Lab was a real thing.

Climate Lab: not a conference

The spirit of this gathering — which we hope is a pilot and will be repeated in 2019 — is to feed the brains of artists with other artists’ practice. Not a conference. Not a scientific training session. A way of engaging and connecting artists across disciplines to be tooled up, fired and inspired in their climate art, activism and production processes. We want to empower independent artists to have confidence in their values when engaging with institutions, and to have an impact on those institutions and audiences. We also wanted to pay them, get them into the woods, feed them and listen.

Sessions explored how to create fair spaces; co-creating community-led rituals; the male capitalist hero and other ecological narratives; the intersectionality of climate justice and frontline nations, stories, power and artists; making work slowly; the ambition to make ecocide an international crime; making art in a capitalist context; formulating a manifesto or code that independent artists can sign up to and share with institutions; who has the right to tell what stories; and, of course, sex, because “sex is, beyond any argument, entirely carbon neutral”…. In between, the group formed smaller buddy groups to evaluate the days; they came up with future project ideas and activist interventions together, and they walked.

A fair and rigorous space

A fortnight on, sitting and reflecting from an urban office, it was a potent and remarkable week; a week in which the notion of ‘intersectional climate justice’ was firmly embedded into their creative practice, and placed concretely within their wider activism — be it feminist, anti-capitalist, anti-racist. Gathering such open, creative thinkers in such a glorious, values-led environment was never going to be a barren encounter. In their words, it was: “enlightening, motivating, empowering, mind-expanding, revelatory, intense, urgent, necessary.”

Together, they created a fair and rigorous space; they formed a powerful cohort, and since we left, the artists have stayed in a daily, dynamic conversation. We are preparing a co-authored blog and a podcast which we will share here and across many platforms… They are organising a film screening, an action across the LTC theatres, and a major dissemination event.

And, in the steering group, we are already planning next year’s Climate Lab. This synthesis of LTC’s work on operational change and artistic change — systems-change both in the buildings and in the art — is a new adventure for us. It is widely agreed that culture — in cities and in rural communities — is a critical force in the climate justice movement. As cultural institutions in London, we are galvanising our commitment to this movement.

Creative Climate Leadership is a new programme for artists and cultural professionals to explore the cultural dimensions of climate change, and take action with impact, creativity and resilience. Artists and the wider cultural community have a unique and critical role: they deal with the art of the possible and influence new ways of being, doing and thinking. Creative Climate Leadership supports cultural professionals to apply these qualities to the climate challenge. The programme is tailored for participants to reach their full potential and maximise action on climate change within the creative and cultural sector, with help and support to test and scale ideas through sharing best practice and discussion across countries and cultures. The programme is led by:

Hawkwood College in Stroud, Gloucestershire, is a residential adult education college serving the needs of a wide community and an educational charity. Their mission is to create a better world for now and for the future. They bring together people and organisations in support of creative endeavour, a flourishing society and a sustainable environment.

We’ve launched our Creative Showcase of new or recent work from our member artists, curators & researchers: poetry/prose collections melt and the hispering, comic books Pole to Pole & The Wizard of O2, non-fiction books Carbon Choices, Living with Trees & Fifty Words for Snow, independent zine Imminent, an online Essential Ecoliteracy course, The Long Return: an essay on belonging, and novels The Wintermen III and SkySeed. Check out the full collection.