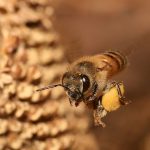 Artist Jennifer Leach shares a story about bees, honey, hexagons and robotics. What the Bee Sees is the first of two stories Jennifer performed at the Festival of the Dark’s micro-festival Dazzle. What if the world were other?

This story is about bees, and honey, and hexagons. I am personally convinced that the very special nature of the hexagon is a key to the tale, and so here I shall begin. A hexagon, as I’m sure many of you will know, is a remarkable figure, with six identical sides, each one of which contributes to one of six indistinguishable equilateral triangles, each with three interchangeable angles of 60o; and with all six triangles converging on the one central point at the hexagon’s heart. If the hexagon’s neighbours are of the same dimensions, they can fit snug alongside, above, below one another, ad infinitum; a community of hexagons can be built by a child, so simple is it. Indeed a magical shape, and quite possibly it is the mystical nature of it that led to a quite extraordinary discovery about bees.

The tale begins at Reading University which, as some of you may be aware, has one of the most advanced robotics research departments in the world. Furthermore, its agricultural department has a research unit that focuses on bees. Ten years ago, these two departments came together with a shared desire to colonise a bee’s vision, to see — first hand — what a bee sees. I was lucky enough to know one of the researchers, from whom I received directly the following account.

To understand the science, it is important to appreciate the enormously complex make up of an apiarian eye. Altogether a bee has five eyes: two are a little like headlights, illuminating the bee’s path quite broadly; the remaining three filter light to create a great sensitivity of vision. Each of these eyes is made up of thousands of small hexagonal units called ommatidia. To see as a bee sees is no mean feat. As you might imagine, it was a work of engineering genius to create a small bee-sized helmet with five robotic eyes that could be clipped onto the head of a bee. It took nine years to develop, and was first ready for testing late last year. You might like to picture this helmet as akin to sunglasses, fitting over the bee’s own eyes yet not disturbing its sight. On 11th November 2017, in the research gardens of the agricultural department of Reading University, It was fitted to a bee we will call Bee A. As opposed to Bee B and Bee C who come later in the story. Remotely connected to Bee A’s cap was a commensurate cap known as the Bee Cap, which a designated researcher in the laboratory wore; the two were remotely connected. What this combination of devices allowed, in short, was for the researchers to share the vision of a bee. Or, as it turned out, to share specifically the vision of Bee A.

So, after recovering from its groggy little operation, Bee A went buzzing off on its normal busy business, as only a bee can do. After dancing around a few yellow flowers in the garden, sucking up nectar, unintentionally pollinating the neighbouring flowers at the same time, it flew off towards the hive. The researchers noted that it tends to see blues and yellows, and can also see the ultra-violet light that our human eyes cannot pick up. So far so good, confirming already known facts about the bee and its eyesight.

Next, Bee A flew into one of the hexagonal cells within the hive and this was exciting. Researchers had never previously had the privilege of viewing the inside of a hive cell through a bee’s own eyes. The light inside these cells is glowing and golden, rich and mellow as honey. The little bee fits pretty snugly inside, deposits its nectar, and works for a while producing enzymes to begin the honeyfication process. The expectation was, obviously, that it would then exit the cell the same way it came in and repeat the entire process. What happened next, however, was revelatory. And here I must ask you please for total confidentiality; this research is revolutionary, as yet unpublished, and must go no further than this website.

Instead of flying out the way it had come in, Bee A flew out the back of the cell. Unexpected perhaps, but here was the seismic shock: as it exited, the robotics researcher experienced a mind-bending, body-altering episode that has left him hospitalised. Electronically connected as he was through his Bee Cap to Bee A’s robotic eyes, he suffered a fragmentation of vision, a severe jarring of his eyeballs; he reported that every atom in his body seemed to condense into his heart area, and for around one second he was as dense and leaden as a lodestar. As he described it, ‘I felt as if the entire Universe had imploded momentarily within my own body.’

Incredible and absurd as it seems, scientists believe that Bee A had entered a pin-sized Black Hole, and even more incredibly and absurdly, passed through it unscathed. Whilst medical staff attended the unfortunate researcher, his colleague grabbed the Bee Cap, reestablishing connection with Bee A.

What she saw almost blew her mind. She was out in dark space aglow with a violet light that can only be described as celestial. Stars did not stud the heavens, they peppered it, millions upon millions of violet swirling stars moving in a diaphanous mist. There are no words for it. Literally no words. It is not a sight that belongs to our universe. And Bee A’s behaviour in this universe was not as on Earth. Its body stretched and elongated so that it became serpentine, streaming along on wings that needed to do no work. It floated, as if on an ocean, carried on an invisible tide that drew it along with directed energy. As it travelled, it appeared to be gathering nectar in its regular fashion. And the researcher noticed that its vision too had altered. Each ommatidium began to spin clockwise, so that the bee’s sight became a kaleidoscope of purple spinning hexagons. After a few seconds, she pulled the Bee Cap from her head, was violently sick, and passed out. By the time she came to a few minutes later, Bee A was back in its cell, and had deposited its otherworldly gathering of nectar.

On completing this task, the bee then fell into what seemed to be a trance. It lay so for several minutes. The robotic cap indicated that the bee was experiencing REM sleep, just as a human would. And then – extraordinarily – whilst still in this state of sleep, it flew out of the front of the cell, and went about its usual busy business in what we shall call, for shorthand’s sake, ‘our world’. As if in a dream.

It goes without saying that the immediate desire by the researchers was to follow up the experiment by trying out the same procedure on what we shall call Bee B. And later Bees C, D, E and so on. Over a period of three weeks they did this, collating the mindblowing evidence that suggests each bee, when it exits the back of its own cell, passes through the same nodal shift as did Bee A but each appears to go into ITS OWN UNIVERSE. (The researchers have learnt, it hardly needs stating, to remove the Bee Cap for the duration of this shift point). No two universes have so far looked alike. Each has its own distinct colour, form of motion, velocity, some are complex, others simple, some light, others more muted. Within its universe, the scale of the bee varies from diminutive to overly significant, and each bee moves about in its own fashion. Some ‘swim’, others roll, one vast bee stood upon its back two legs and walked. Each is, in its own way, utterly wonderful.

In all universes, all bees have one commonality, that of gathering nectar which, after returning back through the nodal shift point to the golden glow of the hive cell, they deliver to the collective. And here is what is, perhaps, most unexpected of all. The researchers at the university have of course closely analysed the bees’ honey, and the evidence is indisputable – no matter which universe the individual bee has collected its nectar from, and no matter by what method, the honey produced back in the hive is exactly the same.

Jennifer’s second story is The Gift of the Goddess Tree. You can explore the Festival of the Dark, the Celtic cycle of the year and more at Outrider Anthems.

Jennifer will be participating in La Liberté d’Expression art exhibition at the Old Fire Station Gallery in Henley, 19th – 25th April, where she will also be storytelling with arch-storyteller Dr Anne Latto.

A poet, writer, performer and storyteller whose wild work, forged in the fantastical reaches of deep imagination, brings to life new stories for our strange times.
Read More