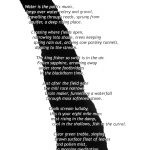 Poet Clare Crossman created a sequence of illustrated poems on nature and climate change for an appearance at Pivotal Festival in 2016. Here, she offers a short introduction and the first half dozen, including In the Blackthorn Time.

In the Blackthorn Time and other poems is a collaboration with multi-media artist Victor Ibanez. The poems are concerned with the state of the land and the natural world in the South Cambridgeshire countryside close to where I live. Recently, through volunteering with Melwood Conservation Group, I became very interested in climate change through contact with Bruce Huett, a member of the Climate Histories Group at Cambridge University. These poems were first performed at a small Pivotal Festival concerned with climate change, run by James Murray-White over a weekend on the site of the Cambridge Museum of Technology. The poem A Triolet was recorded also at The Empty Common Community Garden Party run by Michelle Golder with Transition Cambridge, as part of the climate change movement in Cambridge.

In the Blackthorn Time

I first ‘met’ Clare through her post reflecting on William Blake’s poem, London, which she contributed to the Finding Blake site I set up with James Murray-White and Linda Richardson. Since then, I have developed Clare’s new website for her poetry and I’m working on a new site for Waterlight, a creative environmental project she’s launched with James Murray-White, Bruce Huett and others, exploring her local river, the Mel, in Cambridgeshire.

Clare Crossman’s pamphlet Landscapes won the Redbeck competition in 1997 and since then she has published three collections of poetry, Going Back (Firewater Press, Cambridge), The Shape of Us and Vanishing Point (Shoestring Press, Nottingham). A third collection Common Ground is due in autumn 2018. Her poems have appeared in many anthologies. She performed and wrote Fen song: A Ballad on the Fen in 2006 with the singer-songwriter Penny Mclaren Walker.

Victor Ibanez trained in Fine Art at Art School in Kent. He has worked in graphic design, advertising and television. He is currently a member of Cambridge Art Salon and has facilitated many arts events during The Romsey Festival, in the Mill Road and Romsey areas of Cambridge, in collaboration with Ruthie Collins at Art Salon and Nick Hall at Vinopolis. Victor runs a regular life drawing class. You can see more of his work at his Facebook page.

The Window, The Pear Tree, The Violets, A Triolet, Marmora Road in Summer, and In the Blackthorn Time are the first six in Clare’s sequence of collages with Victor. The sequence is completed with Gold Finches, Naturalist, Cabbage White Butterfly, June at Docwra’s Manor, Solstice and Burlton’s Farm (contained in Clare’s next post, Naturalist), and all twelve collages are for sale. The collection is framed and available for exhibition display on request. You can contact Clare via her website.

A Triolet was included in a short film by Jonnie Howard about the first Pivotal Festival in Empty Common, Cambridge. Goldfinches was commended in The Barn Owl Competition, Devon. The Window was recorded for Fen Song A Ballad of the Fen. And Clare reads a number of these poems and others in The Pear Tree, a film by Victor Ibanez, which you can find at his YouTube channel.

A poet with a background in theatre, collaborations with an illustrator and a songwriter, and practical and creative engagements with local landscapes and nature.
Read More