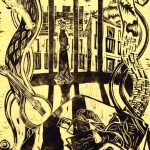 Poet and artist Salli Hipkiss, in the first of two posts, reflects on how she came to understand the urgent challenges of climate change, and decided to write The Riddle of the Trees, a novel supporting positive change.

It all began in 1999 with ‘A Novel Idea’. Not the idea for a book, but a wonderful bookshop of the same name on a dusty peninsular of the East African town of Dar es Salaam in Tanzania. Living there as a teacher, a weekend treat was to head to ‘A Novel Idea’ where highly contemporary international new books appeared as if magically in a town where other correspondence from the rest of the world often failed to arrive. One particular Saturday a book found its way into my hands, as ‘just the right book’ seems to do from time to time. It was The Carbon War by Jeremy Leggett.

I read it in a couple of power-rationing interrupted evenings (the irony was not lost on me) and came away knowing I had been introduced to possibly the most serious issue of our time, and one that would become a greater and greater problem and international focus over years to come. The issue in question was, of course, climate change. My immediate action was to apply for a new additional post at the school where I worked, aiming to become ‘Leader for the Environment’. I was given the post and for two years, in addition to my art teaching duties, I was the Environmental Education coordinator for the secondary school. Over this time I tried to introduce some of the urgency I had sensed through the book, including creating a whole school Environmental Charter.

Jump to September 2006. I had left both Tanzania and full-time teaching in 2002 with the intention to retrain and hopefully carve out a new career in one of my other great passions: music, alongside my arts and sustainability commitments. I was living in Cambridge in the UK as a self-employed arts and sustainability practitioner and educator when An Inconvenient Truth hit the cinemas.

Having read The Carbon War I was very aware of Al Gore and his climate change advocacy work, but most people I knew at that time saw him solely as the former US presidential candidate. An Inconvenient Truth changed all that. I went to see the film three times at the cinema and bought the DVD for friends. My passion was renewed and I wondered once again how I could contribute meaningfully to the conversation around climate change and help to turn things around for the better.

Later that month an opportunity arose to travel to Sierra Leone to help with forest conservation education and my time there helped focus my thoughts. The idea began to form that my personal contribution to the climate change solution could be to write a book that inspired dialogue and change: after all, a book and a bookshop had been my introduction to the issue. Straight away I knew it would be a book for young people, and that the science would be put across through the medium of a magical story. I started to make notes and sketches and by the time I came back from Sierra Leone I had made a firm commitment to write the story.

The advice generally given to writers is to “write what you know”. Although my musical ambitions had suffered many setbacks, music remained a source of great joy and wisdom in my life, and as the idea to write a novel took shape I knew music would be one vital thread through the story. The imperative to help with the climate change challenge formed the other.

I began to read more widely about carbon sequestration and carbon trading and gradually the story began to take shape. It was to be set in a future when ‘carbon balance’ has been achieved through widespread reforestation. A new crisis would then emerge when a mysterious disease befalls one such forest and threatens the others, and therefore puts the carbon balance into peril and the threat of climate change looms again.

My deeper ecological message was to illustrate that in planning for widespread increased sequestration as one solution it is vital that we also keep sight of the need to protect biodiversity and that a healthy planet will only prevail if we seek health on all levels. The other deeper message was that this may only come about if we put aside our cultural differences and work together as one humanity.

The Riddle of the Trees

Characters appeared next: a lonely teenage girl, a shy teenage boy, a Forest Keeper grandfather who is too often absent due to his commitment to the forest, international musicians who carry the sounds of nature and the seeds of culture from all quarters of the world within their music. Other key characters are a heavy-handed Ealdorman who tries to save the forest by imposing greater and greater restrictions, and a reclusive artist living in the forest who provides intuitive wisdom born of her close connection with and immersion in nature. Then the settings emerged: a forest by the sea, a former palace turned cultural centre, a portside town, and a mysterious cottage in the woods with a magical tower and observatory.

I started to write, sitting at a corner desk in my one-bedroom maisonette with a cherry tree just outside the window, or in one of the many cafes in and around Cambridge.

In 2007 I embarked on a Masters degree in Children’s Book Illustration, envisaging, amongst other outcomes, a beautifully illustrated chapter book of my story, or even an interactive ebook with moving illustrations and strains of music at key moments. The course turned out not to be the right place to nurture the story, and a year in I took a break and a part-time job in a shop aptly named ‘One World is Enough’.

I continued to write. Then after focusing on finishing the MA in 2010, I completed the first draft of the story and The Riddle of the Trees was born.

Since then the story has undergone numerous revisions and attempts at publication while I have also been raising a family. Now, almost twenty years after first reading The Carbon War I feel inspired once again to try to get the story out into the wider world where I hope it will inspire young people and others to care more deeply about climate and biodiversity issues and to take individual and collective action. Perhaps when this happens we will be one small step closer to achieving not only carbon balance but also ‘Carbon Peace’.

Salli’s second post in this series is The Riddle of the Trees: A Paean for the Natural World. And her recent poem, Modest Things — asking how English poet, artist and radical William Blake might have responded to climate change and what examples we might take —  is published at Finding Blake.

Jeremy Leggett’s The Carbon War is no longer in print but you can find second-hand copies online, and you can read a download of his follow up book, The Winning of the Carbon War at JeremyLeggett.net

In An Inconvenient Truth, (2006) by Davis Guggenheim, the film follows former vice president and presidential candidate Al Gore on the lecture circuit, raising public awareness of the dangers of global warming. Grist has an interesting behind-the-scenes at how the film came about, An oral history of An Inconvenient Truth.

The 2017 ‘sequel’ film An Inconvenient Sequel: Truth to Power, by Bonni Cohen and Jon Shenk, follows Gore as he speaks with scientists and leaders, and is featured in this Scientific American (28/7/17) article, Al Gore Returns with an Ever-More Inconvenient Truth.

A writer, artist and educator, producing picture books, a novel and songs, with a background teaching and facilitating arts and sustainability with schools and communities.
Read More