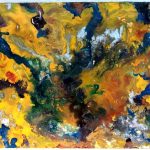 Artist and writer Dave Hubble reflects on his creativity under lockdown: how novel conditions and wanting to avoid coronavirus-saturated art sparked new work, drawing out potential beauty in the materiality of pollution and prompting the question, what next?

Half a year ago everything stopped — galleries closed, exhibitions and performances were cancelled or postponed, and we did our best to make art in the spaces (and headspaces) we were left with. Some events went online but in most cases, welcome though that is, it’s rarely the same experience. Culture needs space and people in real life. We want a sense of texture, of immersion in the space, and the opportunity to ignore the ‘Do Not Touch’ signs even though we wouldn’t really.

Now, some of this is starting to reappear and we get to tackle our ‘rona-fear and decide whether we’re ready to be in the same places as other people, even in a limited way. Galleries have begun opening with online booking for limited timed slots and I’ve just had an email asking whether I’m still interested in exhibiting at a show originally scheduled for April 2020 (I am). I’m back in my studio a day or two a week, complete with rules for distancing, sanitising and air-flow. Gatherings, even outdoors, are still listed under ‘nope’. By the time that show launches in late October, I might be willing to attend the opening, we shall see.

However, this is all about what happens to art after it’s been made — what about our creativity itself? Some of us have managed to be productive during lockdown, others haven’t, whether due to lack of suitable space or simply having that part of them squashed by anxiety. I’ve been lucky in that I was able to set aside some space at home, and time off from gallery work and all those launch events meant I could make art. It wasn’t the same art though — I had neither the space nor materials to work on the messy junk-art installations I favour, so I dripped and splattered paint in the back yard when the weather was reliably warm and dry, but mostly I drew. Table + paper + pen.

I dug up ‘finds’, cleaned, drew and described them, and produced a faux-report to create a piece called Lockdown Garden Archaeology. One day I may get to show it somewhere, but in any case it’s something I wouldn’t have produced under other circumstances. During the process, I found lumps of charcoal in the soil, from a bygone barbecue presumably, and used them to draw. I wouldn’t have done that either and the same goes for the sound-pieces I produced linked to Zoom writing workshops and our virtual Open Studios event — a departure from my usual practice, and a welcome one, regardless of the reason. One question is unavoidable though — what next?

As we respond to the world around us, it’s easy to feel pushed towards making ‘rona-themed art, but we may not want to. Unlike my visual work, aside from an existing commission and my responses to a few workshops, my poetic output dropped to almost nothing. I didn’t want to write about the pandemic, but that’s all there was, so I wrote little. Free-writing reams of anxiety did not clear the way for other topics, and I felt no urge to add to the mushrooming of lockdown novels and collections. Some will be great, most won’t be, but maybe that’s not their purpose. As we reemerge, the same issue develops, and my mind is full of clichés — blossoming, chrysalis, survivors crawling from their bunker to blink in the sunlight. I do not want to make work based on these, not even ironically. I’m unsure whether my artistic output should ignore what is, currently, a hugely important aspect of life, but attempts to produce any ‘rona-based creative output simply leave me feeling flat. I am saturated by it and need to think about something else.

Of course there is no shortage of urgent topics to respond to. None are soothing, but that’s not the point from my perspective — I rarely produce primarily decorative work in any case, and so I return to the fundamentals of my practice. I am, above all else, a junk-artist focusing on the use of waste materials in my work. I am materials-driven, they are my prompts. Paint on canvas remains an artistic staple, so that’s the route I took last week, repainting an old canvas with a selection of bequeathed enamel paints that were sat there, waiting to be used.

I am forever intrigued by the idea of finding beauty in that which is not typically considered beautiful. This is of course not a new concept; in the 19th century, Thomas Hardy wrote “To find beauty in ugliness is the province of the poet.” As mentioned above, I’ve found the poetical route difficult recently, but the visual one less so, and a quick web search finds no shortage of photographs depicting the rainbow colours of pollution from industrial outflows and the iridescent shimmer of oil. Pollution is ugly as a concept, but there is a beauty to be found in it — one that is as unwelcome as any positives we may personally get from lockdown, whether a reappreciation of our living space, an opportunity to take some time off, a chance to reevaluate our working and social lives, or even acknowledgement that being able to do these is a form of privilege.

The outcome of mixing enamel and sand, pouring and brushing, is Yellow Boy. The sand forms bars and channels that the paint soaks into and fills, pooling in places to create a flat reflective surface. It is a small, artificial landscape, and the title is the name of a type of water pollution caused by mining, where iron (III) hydroxide precipitates to form a yellowish solid. Sometimes the compound is so concentrated that it can be collected and used commercially to make pigments. There’s a certain irony in this as some of the pigments will go on to produce visually pleasing results, and a satisfying parallel to the work itself.

So, how does this tie into the idea of re-emergence? The subject matter doesn’t, but it is the first piece I’ve made since lockdown which is designed to be hung on a gallery wall, and maybe even bought (you never know). It exists because I am once again looking towards events in the real world. It is heavily textured in a way that does not lend itself to online exhibition. I could take angled shots to show this, but that is not how it was made to be seen.

None of us knows if and when a second wave will happen, and if it does, whether it will happen everywhere or patchily with local lockdowns. We can plan for events to happen, knowing they might get postponed, but we’re used to that now. We can look at ourselves and see how we’ve changed. I’ve vowed not to let myself get as overworked as I was until March, and that includes being more selective about which art events I go to, focusing on those where the artists and organisers reciprocate and support others in the local scene. I know that doesn’t apply to bigger names, but on a local level, maybe we can break those cliques and barriers a little, overlap our Venn-circles, be a bit more mutually supportive. The Arts have been hit hard by ‘rona, we need solidarity. We need to change, shed some old ways, and fly… damn.

Dave offered his poem and painting, A Time for Shedding, during Week 4 of our Quarantine Connection series, where you can explore 40 contributions from our member artists, curators and researchers. What has been your experience of coronavirus lockdown and the gradual reemergence from that? Have you found new ways to express creativity?…

Dave mentioned the Southampton Open Studios event he took part in, which this year was run online, and he has written about this at his blog: Openings (24/7/20). And you can read about the sound-pieces he produced in lockdown: Aroundsound (31/7/20).

The website of non-profit organisation Earthworks discusses the problems of acid mine drainage, such as the pollution that Dave has drawn on for his work: “Acid mine drainage can be released anywhere on the mine where sulfides are exposed to air and water — including waste rock piles, tailings, open pits, underground tunnels, and leach pads. Acid drainage is often marked by ‘yellow boy,’ an orange-yellow substance that occurs when the pH of acidic mine-influenced water raises above pH 3 … so that the previously dissolved iron precipitates out.”

On the question of finding beauty in ugliness, Dave shared Emily Brady’s paper Ugliness and Nature, published in Enrahonar: an International Journal of Theoretical and Practical Reason (45, 2010). Brady argues that we might have reasons to care about ugliness in nature, and therefore seek to protect it: “experiences of ugliness have epistemic value, they increase our ‘aesthetic intelligence’ through the development of an engaged appreciative awareness of ugliness and all forms of aesthetic value. How might this aesthetic intelligence translate into developing a moral attitude toward nature? Through the exploration of the negative side of aesthetic value, we discover, I think, a different kind of relationship to nature, one that is not friendly or close, but one that strains us through its uneasiness.”

An artist and former ecologist exploring how people will be creative in a future that looks increasingly bleak, but tinged with hope that it won't be.
Read More