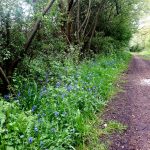 Writer Julian Bishop, living on the very edge of the metropolis, found a fascination with local verges during Covid-19 lockdown — and their previously unregarded nature took up residency in his imagination, leading him to a poetic challenge.

Odd, but lockdown opened up the world for me more than closing it down. I live on the very edge of London (High Barnet, actually) in what we joke is the last road in London. Two minutes’ drive away, houses give way to fields and woods before being reined in by the M25. A true green belt.

Being a busy London-sort, my direction of travel used to be either by car to another conurbation or by Tube into a metropolis. Oh, I’d walk to the gym to do a treadmill run and take the dog around the block. Lots of treadmills to choose from, in fact.

And then all the treadmills stopped. My regular journeys into London, aimless shopping trips, poetry readings, my regular contemporary poetry workshop in Enfield — all ground to a halt almost overnight.

The lack of a gym was easy to fix — I started to run (and walk the dog) through the mysterious green acres I’d dismissed as ‘not real countryside’. And gradually my forays extended deeper and deeper, further and further.

Life on the verges

I discovered a bluebell wood, a marvellous open space called charmingly Saffron Green, an ancient yew wood, a stream I never knew existed, which is a source of Dollis Brook… I could go on. And when I ran along the roads, I started to look down and around rather than straight ahead. I became obsessed with the verges — so many wildflowers and verge-dwellers giving their presence away with little quivers in the grass.

And I began to notice what fellow ClimateCultures member Dave Hubble described in his recent blog as “the beauty in ugliness”, particularly on the unloved verges with their dramatic stands of hemlock, beefy cow parsleys and diverse grasses. My run takes me alongside a short stretch of the A1, which foamed with hemlock in June — how many motorists realised they were driving through a natural toxic cloud? And what I ran or walked past every day slowly took up residency in my head.

All this while, I’d been responding to lockdown through poetry. I decided to take up the challenge set by fellow poet Jacqueline Saphra (whose Poetry School classes I used to attend pre-covid) who decided to write a sonnet a day. I think I lasted about three days… and Jacqui went on to write a hundred (she’s been recording them and putting them up on Twitter).

But I managed a couple of dozen — and noticed, as they developed, the predictable themes about missing loved ones and fear of the future gave way to these unremarkable and unloved stalwarts of the natural world. I took notes for what I called my ‘Sonnet Room’, which I decorated with all these wonderful so-called ‘weeds’. I dreamt of bittersweet, common hogweeds. The bluebell wood earned a sonnet of its own — as did Saffron Green, which was published as part of Hertfordshire’s Community Archives project.

Some of these new poems I’ve included in a submission for a pamphlet that I’m hoping to get illustrated and printed.

And other poems presented themselves beyond the sonnet form: a sunbathing grass snake spotted one day on the road verge, crawling over a pile of laughing-gas canisters; a hedgehog (sadly knocked over); the binbag-strewn ditches; a bramble next to a fly-tip, with the biggest blackberries I’ve ever seen…

So lockdown was (excuse the pun) an extremely fruitful time as a poet — and now I’m hooked. What will the bluebell wood look like in the dead of winter? Saffron Green frosted? The stream in flood? How will the verges look next year when the council cutters come back with a vengeance?

I discovered it on a run – something
I’d never done before, exploring
the richer world hidden beyond
the front door. Pasture turned
into woodland until it was layer
upon layer of primrose, anemone,
paths tickled with white comfrey,
finches in trees, just feet away
from the A1. I watched the conceit
of exhausted lives in the fast lane
rush by, the tang of arcane
carbon in its wake, now obsolete
as packed tubes or nine to five
and I was astounded to be alive.

Such silent nights – roads breathless
as if they were infected. What we’d lost –
constant traffic, the drizzle of exhaust –
invisible and insidious as asbestos
or the virus itself. Then a blood-clabbering
sound emerged: a nightly chorus,
foxes hollering like a hunt in reverse –
as if hounded animals were fighting
back. A beastly untameable disease
stalked the streets while humans retreated
like quarry to a den, our vulnerabilities
sniffed out by a hungry meat-eater.
Lives on pause for weeks – it smacked
of wild animals getting their own back.

One month in and a wild rush hour
quickened along the verges, nature
slamming down hard on the accelerator –
rigs of cow parsley towered
over kerbs in Galley Lane, exploding
into stars, rivers of bluebells lapped
against the tarmac on a surge of sap
fuelled by a million lost springs.
Dandelions had no time to turn clocks
into ashes when the lockdown stopped.
Air charged with birdsong soured
in the roar of a more familiar rush hour;
when strimmers returned to crew-cut
the verges, all our new rivers dried up.

Julian previously contributed The Hunt for Day 21 of our Quarantine Connection series, and some of his recent poems appear in a chapbook anthology, Poems for the Planet, alongside three other contributors: Maggie Butt, Sarah Doyle and Cheryl Moskowitz. Julian says: “The four of us launched it just a couple of weeks before lockdown at the Faversham Literary Festival in Kent, sharing a bill that included Jenny Eclair, Ken Livingstone and Everything But the Girl singer-songwriter Tracey Thorn. Our London launch was at Christ Church in Southgate which is registered as an Eco Church with A Rocha (an international network of environmental organisations with a Christian ethos).” Poems for the Planet is available from Maggie Butt’s website.

Julian mentioned Dave Hubble’s ClimateCultures post, On Re-emergence and the Avoidance of Clichés, where Dave comments: “I am forever intrigued by the idea of finding beauty in that which is not typically considered beautiful.”

You can find Jacqueline Saphra’s sonnets on Twitter, and more information on 100 days of sonnets: unlocking that maddening door at her website. See The Poetry School for their courses, including with Jacqueline.

UK charity Plantlife has published a Good Verge Guide – a different approach to managing our waysides and verges (2016) and a guide to plant life on our road verges, Road verges – Last refuge for some of our rarest wild flowers and plants (2017). They are currently running their Road Verge Campaign: “If all the UK’s road verges were managed according to our guidelines, there could be 400 billion more flowers, equivalent to an extra quarter of a million acres of meadow. Just imagine!”

A former journalist, environment reporter and tv news editor who writes poetry about eco issues and was runner-up in the 2018 Ginkgo Poetry Prize.
Read More