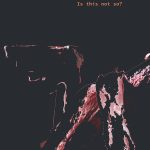 Artist and writer Jennifer Leach recalls the journey from a sharing of darkness at a climate conference for artists and scientists, and the year-long festival she created in its honour, to her new book, Dancing in the Dark.

In 2016, Festival of the Dark was born on Winter Solstice in Reading, and ran for a full year. It had bloomed remarkably quickly from a seed planted at the TippingPoint climate conference — Doing Nothing Is Not An Option — that had been held in Warwick in June of that year. These TippingPoint conferences had for many years brought together scientists and artists, in the context of climate change; the scientists brought the facts, the artists the imagination to creatively take these facts along with their work and out into the world. The 2016 conference could not, initially, shake off a persistent sentiment of doom. Many scientists said they had little new to say, many artists felt they had tried and failed to effect change. Many delegates felt we were still hooked on looking for solutions, rather than extricating ourselves from that singular goal and extending our sight over a wider terrain.

What is it that we fear?

Yet something developed over that weekend that was unpremeditated, and I believe it was the presence of a coterie of particularly feisty women who may have had something to do with it. They began talking about the heart, rather than the head. One delegate counted the number of times the men said, ‘I think’, and the number of times the women said, ‘I feel’. One delegate humorously objected to being told, ‘Doing Nothing Is Not An Option’ and she set up a break-out group called ‘Doing Nothing IS An Option’. I was too busy lying under a yew tree doing nothing to go, but I hear a remarkable rainbow appeared from nowhere and spread across the wall of the small unprepossessing room in which they sat. By the end of the weekend we were talking of a new spiritual paradigm, a shift of focus from the head to the heart. There was no point, many of us agreed, in trying to find solutions until we had fully explored why and how we had arrived in this place of self-motivated disaster. Why are we acting as we are? What is it that we fear? What is it that we are resisting?

It is a much longer story than I can tell here, but in the course of the conference, someone suggested that there could be a day set aside for all theatres in the UK to turn off their lights and play in darkness, or by candlelight. This throwaway suggestion, one of many in a series of brainstorming sessions, brought about such extreme reactions that a small group of us attended to the energy generated and set up a breakout group to explore the darkness. Why was the darkness seen as Luddite, why was turning off the lights seen as a reactionary action, an action that contained within it all that people loathe about the ‘environmental lobby’? Why is darkness seen as non-progressive, as negative?

I recall feeding back from our group to the plenary session, and slightly tongue in cheek saying we’d hold a festival in Reading, at the end of which we’d turn off the lights across the town. ‘If it can happen in Reading [which it didn’t quite!], it can happen anywhere.’ So was born Festival of the Dark, which opened around four months later, with full Arts Council funding.

I did not know where the Festival came from, it surprised me, and I did not know what it wanted. It was perhaps conceived as being grand; it ended up sweet, subtle, subterranean, dancing beneath the streets of Reading like the Holy Brook whose waters do likewise. It did not end with the sweeping gesture of a great Lights Off ceremony (in a corporate town at the height of the Christmas shopping season?!), yet soft candles, and faces lit by campfire stories, and even darkness, came to be its keynotes. It softened as the year progressed, and the steely imperatives of its inception transformed into a more mellow weave. Yet what it held was radical, daring, brave, and those who chose to participate showed courage. The festival ended in darkness on 21 December 2017. After a night of food, music and reminiscence, as we watched snatches of video from each of the Festival’s 21 events, we stood unable to see one another, arms around each other, and sang. A quite glorious community anthem slipped out from the darkened windows of a generous venue, now boarded up, and escaped into the night.

I wrote Dancing in the Dark for the Opening Ceremony and in many ways it became a signifier for me, for the Festival itself. Its unknown origin, its uncanny form, its darings and challenges, and its unswerving message of quiet assurance that ‘all shall be well’ came in from outside my self. The work, I am sure, bubbled up from our sharp ancestral past, when death, hunger and danger were ever-present and the skull was a bed-fellow for the living. It wove through the starry heavens of Galileo who unhooked us from the secure centre of a human-anchored universe, and flung us out into orbit around a foreign star. It took me deep into my own heart, to a place of fear, and asked me to jump, into the racing pulse of the unknowable, and the unknown. And it led back out into the weightless universe where, divesting of the small and false securities that keep us tied to fear, there is to be found a joyful liberation in our magnificent insignificance.

Freed from the tyranny of our dread

I worked with a dear friend on presenting the piece. She brought music to it. On four long nights we found ourselves in a back garden multifaith temple, in midwinter, breathing the words over candles and a calorgas heater, cold but entranced. The magic happened here. Strong ancestral stirrings were at work, and we felt perhaps that we and our ancestors were clumsily mapping out a new way to work with these crazy descendants who don’t, to misquote Hamlet, know a hawk from a chainsaw.

The ‘performance’ itself was imperfect. A childcare crisis arose minutes before we began, we broke a microphone in the dark, and we could not see. It mattered not. The power was in the process, in the imprecise nature of the very real exploration of imagination that began with the words, the music, and later the images, and which are now loosely harnassed in the pages of a book.

A conference cannot avert a crisis. A Festival cannot. A book cannot. We do not, in fact, know whether anything can, not even the accumulation of every great head initiative and every great heart initiative focused right now on the calamity of climate emergency. What I do know is that the courage to make tangible our rightful fear, to acknowledge it, and to launch ourselves into it, will profoundly change us, and liberate us from the tyranny of our dread. And in this, every small creative contribution adds one more small stone to place upon the communal cairns of our courage. Welcome waymarkers on unknown paths.

Dancing in the Dark is available to order for a very limited time — and in a limited edition print run. This Kickstarter campaign — which has already ensured that the 48-page, richly painted story-poem will be printed and delivered to its backers — closes early on the morning of this coming Sunday — 18th August. On the project page, as well as examples of words and images in the book, you can hear Jennifer give a short reading from it.

Jennifer’s recent post, Earth Living — Now, Facing the Storm, explores some of the ‘questioning tales for a world’s ending’ she told at the recent Earth Living Festival in Reading, and the relaunch of her Outrider Anthems enterprise as a sanctuary of creativity.

You can read On Night in the Daytime, my ClimateCultures review of Night Breathes Us In, which was an event from Dark Mountain Project as part of the Festival of the Dark. The Dark Mountain website features two other accounts from members of that organisation’s team who took part: Charlotte du Cann, and ClimateCultures Member Sarah Thomas.

A poet, writer, performer and storyteller whose wild work, forged in the fantastical reaches of deep imagination, brings to life new stories for our strange times.
Read More