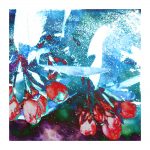 Photographer Veronica Worrall explores how art can offer an important emotional response to global pandemic and climate crises, sharing her ‘lockdown’ project to generate images where photography partners with natural processes to produce a visual essay of optimism.

In the early months of Covid-19 lockdown I found an escape in an azure canopy. I mentally soared over my garden, taking refuge in the exquisite beauty of the empty skies. I found solace from the devastating pandemic. The budding leaves and blossoms showed themselves with exuberance against a royal blue which dimmed elegantly to the horizon. An occasional wisp of cloud offered a sense of distance — a dream hovering. Humanity was facing disaster and yet my garden was thriving. I was being torn between relief that nature was being given a chance and the tragedy that was unfolding across the globe. Like many I turned to capturing images of my garden’s beauty whilst I confronted human mortality.

I was reminded of the very first photographs which were taken to convey a state of mind, the work of Alfred Stieglitz. In 1922 and again 1923 to 1934 Stieglitz made photographic series initially called Songs of the Sky and later Equivalents. Stieglitz had a tumultuous affair through these years with the artist Georgia O’Keefe. He pointed his camera skywards “purposely disorientating”, purposely seeking to take his viewer to his own emotional state. The resultant images of clouds, more than 200, were Stieglitz’s equivalent of his emotions, what Emmanuelle de l’Ecotais has described — in his book accompanying the 2018 ‘Shape of Light Exhibition’ at the Tate Modern London — as “his inner resonance of the chaos in (his) world and his relationship to that chaos”. De l’Ecotais goes on to discuss the exhibited samples of the Equivalent images, suggesting that Stieglitz’s work, although not strictly abstract, was the forerunner of photography moving out from being a purely representative medium. This led the way for photographers to experiment with their own ‘equivalents’. They worked to convey creatively their own emotion following other artists of that time, such as O’Keefe, who were exploring how visual art might evoke the same emotional response as music.

So it is no surprise that many photographers during our 21st-century global pandemic have looked to portray their own psychological state. I was drawn to the skies to express both my joy and fear.

This is not the first time in stressful moments that I have used the sky as a haven from my extreme emotions. For example, I took photographs following a Force 10 storm in the Arctic Sea after the boat on which I travelled responded to a Mayday callout. Eventually the other boat was found tucked into a safe anchorage and no one was lost, but the relief was short.

During this trip, I personally witnessed the extent of climate change. These photographs taken after the storm hold both my relief but also my fear of imminent danger. They spoke to me of a unique moment of time and space, when disaster can be averted. And so it was, one evening three years later, in the early days of our global pandemic, the sky outside my front door symbolised both my dread and my hope. My photograph I called Optimistic Outlook.

This was a moment when my photography became an ‘art’ aesthetic. The importance of the image was the philosophy involved and my eye’s attempt (quoting George Clarke’s book, The Photograph) “to transform the most obvious of things into its unique potential” — an art equivalent. This image captured my passionate hope that we come through this global chaos with a deeper understanding of how humanity needs to change radically to avoid the predicted tipping point that would result in global chaos, set out in the Intergovernmental Panel on Climate Change’s 2018 special report, Impacts of 1.5ºC of Global Warming on Natural and Human Systems.

Two months later, May’s warmth filtered into my garden, I was taking refuge in the blossom against perfect blue. I became mesmerised by the delicate beauty. I was not the only one. Facebook, Twitter and Instagram evidenced a burgeoning re-connection between people and the natural world. How could this be sustained? How could we stay reconnected?

This thought seeded my ‘lockdown project’, a continuation of my earlier exploration of partnering with natural processes to make art, in ‘Project Unseen’. My photographs of blue skies and blossom were returned to the trees and left for months, as shown in the image above. Nature’s elements and creatures traced over my images. Whilst monitoring my images attached to the trees a few months later, I noticed the skies overhead were becoming crisscrossed with vapour trails as lockdown relaxed. The sky was symbolising my concern that lessons were not being learnt in a rush to return to unsustainable travel and consumer trading.

Nevertheless, I was determined to continue with my ‘lockdown’ project. My ‘strung up’ photographs were taking a battering in a gale and many images had been significantly degraded — a layer of metaphor. I retrieved them and, although feeling despondent, I decided for this project I would not dwell on dark messaging but use these images as a visual essay of optimism — semi abstracts, my ‘Equivalents’ of hope. I would strive to stay positive in a time of chaos. The images Hope 1 to 5 are part of my project ‘Stay Reconnected’.

Together Nature and I created colourful art pieces, symbolic of the much-needed partnership. We convey the joyful reconnection many had found in our gardens, parks and wayside walks. The images hold my hope for the Climate and Ecological Emergency Bill presented to the UK Parliament on 2nd September. This is the direction needed to preserve nature’s systems and diversity for future generations.

In past weeks the youngsters have returned to their studies preparing for their futures. Holidays are over and across the world Covid-19 cases are surging upwards again. Chaos is reported across trade and travel industries subjected to a conflicting renewal of government restrictions. The sky has returned to a dome of deep blue, wearing again its symbolic robe — asking us to revisit what is important. More than ever cooperative wisdom is required. Is it possible for our world leaders to collaborate on strategies, policies and practices that allow humanity to stay re-connected to the essence of our existence — the essence captured on cameras as trees blossomed under clear blue skies?

There is more on Veronica’s ‘Stay Connected‘ project and her earlier ‘Project Unseen‘ at her website.

You can see some of Alfred Stieglitz’s Equivalents series at the Met Museum’s online collection. As the note there explains, “In these purposely disorienting and nearly abstract images, Stieglitz sought to arouse in the viewer the emotional equivalent of his own state of mind at the time he took the picture and to show that the content of a photograph was different from its subject. The Equivalents trace Stieglitz’s emotional response to nature through periods of ecstasy and darkness, romantic engagement, and confronting mortality.”

The Photograph, by George Clarke, is published by Oxford University Press (1997), in their Oxford History of Art series.

Impacts of 1.5oC of Global Warming on Natural and Human Systems is published by the Intergovernmental Panel on Climate Change (IPCC, 2018).  Michael Marshall’s recent piece in The Guardian (19/9/20) discusses The tipping points at the heart of the climate crisis.

You can follow progress (hopefully) on the UK Parliament’s Climate and Ecology Bill 2019-21, in the Parliamentary Business Progress. It is a Private Members’ Bill, presented by Green MP Caroline Lucas, “to require the Prime Minister to achieve climate and ecology objectives; to give the Secretary of State a duty to create and implement a strategy to achieve those objectives; to establish a Citizens’ Assembly to work with the Secretary of State in creating that strategy; to give duties to the Committee on Climate Change regarding the objectives and strategy”, and is due to be debated in its Second Reading in Parliament in March 2021.

You might also explore other artistic examples of emotional response to the climate crisis, for example in Deborah Tomkins’s ClimateCultures post Grief, Hope and Writing Climate Change. And in an interesting ‘working document’, Belonging and Imagination in the Anthropocene: A Social Action Art Therapy Response to Climate Crisis, Jamie Bird of the Centre for Health and Social Care Research at Derby University, addresses cognitive and emotional responses to climate crisis. He draws on experiences using “imagination and the concept of belonging in work with those who have experienced political and domestic violence” to propose how social action art therapy can offer a way of meeting the “intersecting forces that flow into and out of climate crisis”. He has also written about this research approach in a post for the university website (23/01/20), Climate anxiety: How can we process our emotional responses to climate crisis?