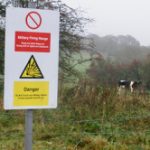 Researcher and writer Wallace Heim recently completed ‘the sea cannot be depleted’, her online project exploring the military exploitation of the Solway Firth. Wallace shares her reflections on the inspiration behind this powerful project and her creative process.

Outrage is compelling. It moves you. It flares around an event, lining up adversaries as it draws temporary certainties from the flux of life.

The UK Ministry of Defence (MOD) fired at least 30 tonnes of artillery shells containing Depleted Uranium into the Solway Estuary to test those munitions on behalf of an unnamed ‘customer’. The firings began in the 1980s, from the Scottish side, with the last firings in 2011 or 2013. The MOD justified this illegal dumping of radioactive waste into the sea as being ‘placements’. Attempts to retrieve the shells have failed. Their locations are unknown.

Responses to this news slide easily into anger for the injustice of these firings and shock at their stupidity, alongside a desire for accountability or reparations by the military, which will not and cannot be met. But what happens when the clarity of outrage, and its certainties, get mixed up with everyday life? When they somehow bind with a place, when they merge and dissolve into it, like the radiating materials drifting in the Irish seas?

“No brink of the end of humanity was gazed over. It barely made the news … Thousands of years pissing in the sea with everything we can’t digest, all the rancid debris that we could throw in there, all of it, and now this … The military got it the wrong way around. They didn’t place the uranium. No. They placed this estuary. They made it into their place. They made it into their military nuclear sea,” the Man says. 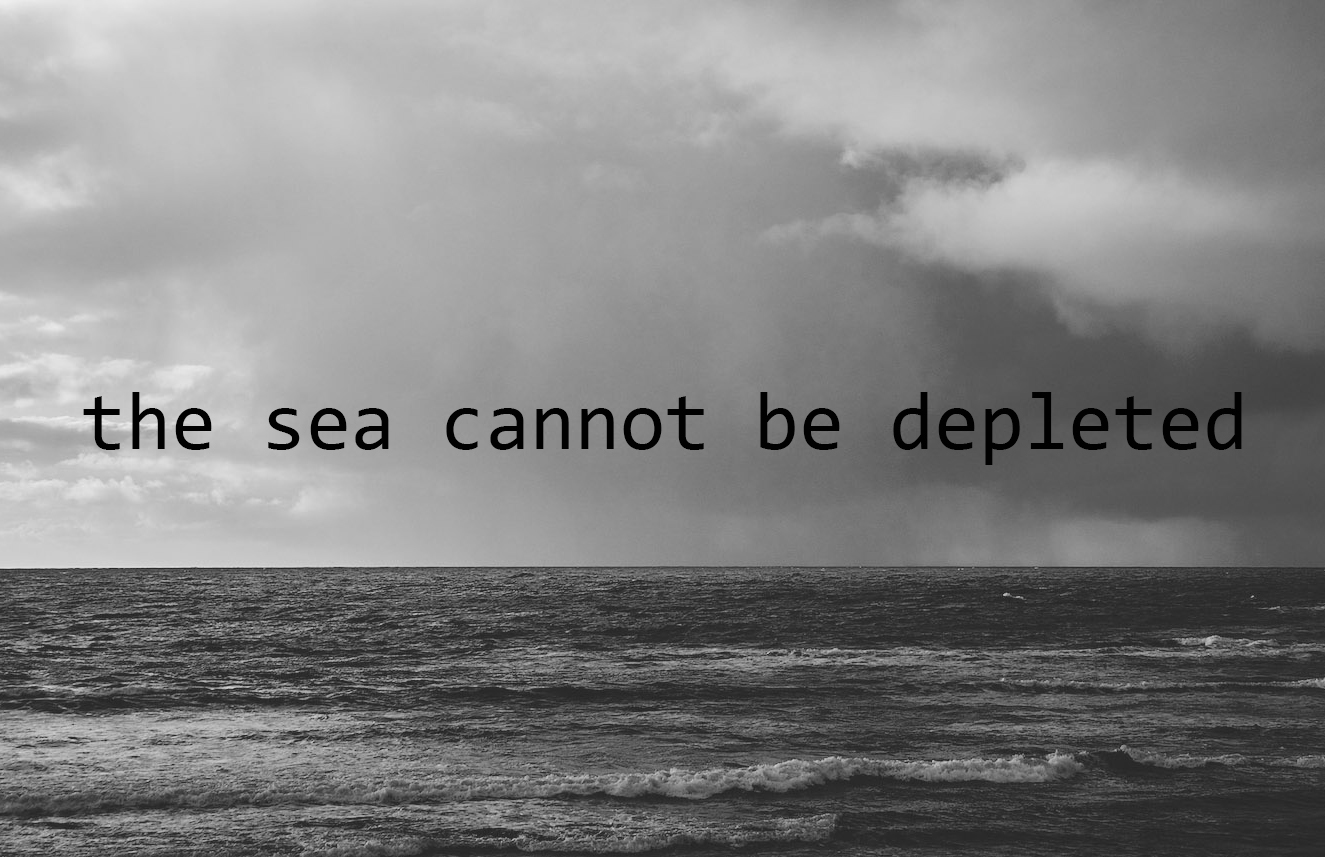 ‘the sea cannot be depleted’ is an online project, composed of three parts: a spoken word and sound piece for three voices, accompanied by essays and by documentation about the firings and the effects of Depleted Uranium. The sound piece is fictive, based on interviews and research. In it, a Man speaks from the Scottish side of the estuary, the firth, an area of cliffs, bays, granite and farms. A Woman speaks from the English side, flat lands of ancient peat, grasses and farms, around the headland from the civil-military nuclear industries of West Cumbria. And a Diver speaks as she enters the night sea:

“On the edge here, soft sand, bird tracks and worm casts and the plish of water on my bed-bare feet. More salt than fresh. Read the surface for danger. Go in, between heartbeats, mine and the sea’s … Tentacles brush my legs. Wrapping me in the softness of their sucking, jelly skins. They are curious about me. Me. Am I food? … Drifts of something cloud my eyes. Plankton wandering in from far seas. I swim in sex and food and sea talk.”

The form of the piece was shaped by my need to ‘hear’ the radiation, to have it enter somehow directly into the human ear. And by the negotiations of outrage and conflict that were needed in order to understand and express something of the turbulence of unknowable consequences and the transfiguration of uranium let loose in the continual, mixing tidal forces of an estuary.

Radiation cannot be heard, smelled or touched, but is known through the rattled clicks of the technologies that measure it and make it perceptible to humans. Those sounds are too familiar. I wanted to hear it and to represent it through the human voice, through its vibrations and resonances as well as through the articulations about the effects of knowing what has been buried. The music by Pippa Murphy, too, does not use conventional ‘nuclear’ sounds, but creates a melodic line, that holds, falls apart, dissolves, and reforms.

Nuclear issues are stark and divisive. My certainties are reasoned, ethical and emotive: I find these military actions unjustifiable, expressive of hubris and embedded in a global economy of harm. I had to relate those certainties to the government position which supports the use of Depleted Uranium, and to the scientific reports available, both by independent researchers and the military. The latest find that ‘uncertainty’ characterises what is possible to definitively measure; no one ‘knows’.

I did not want to set out adversarial arguments between conflicting sides, as if that was a kind of balance or a reliable process towards truth. Nor did I want to hone the subject matter into something more solidly activist. Rather, for the Man and the Woman who reflect on their relation to the sea and the firings, I wanted to keep to the outrage, but as it is compromised and embedded in everyday life.

The action in theatre, by historical conventions, moves with the forces of adversarial human conflict; two sides, with variations. But theatre and performance have, for the past decades, developed other dramaturgical strategies, broadly categorised as the postdramatic, for creating flow, mood, character and vibrancy. The ‘two-sides’ device has seeped away from some performance practices as it doesn’t adequately allow for a genuine expression of a situation or condition. At the same time, in ecological thinking, the entwining of human conflicts with environments, waters, lands, other living beings, or perceptions of nature – are complicating the order offered by adversarial conflict and requiring other ways to comprehend and address what is a condition of life, one that is pervasive, intractable, characterised by uncertainty and a lack of lasting solutions.

The firings were a rehearsal for war and were hostile fire on a home sea. How can one understand the slow corrosion that endures? What does it mean for a place, a people, to cohere with the unseen objects of war? How do you make a life with, or disavow, the symptoms of the civil-military nuclear complex? How does the knowable coalesce with the not-knowable?

“How do you keep safe?

The Military devised tests to prove these firings were safe for humans. They measured seaweed and crabs and grit and urine. What they forgot was the sea. They forgot the turbulence, the planetary forces of gravity pulling oceans across a chiselled bed. They forgot the curiosity of the tender animal, too small for any net. They forgot that some humans are pregnant women.

It’s probably all right. It has to be. We have to live as if it was.

The swells of silences, they hold us tight … What adds up, what counts on this coast is what keeps the working public paying taxes. That’s what keeps things quiet … The sea will loosen and unravel all that we can’t talk about,” the Woman says.

The Diver is a different kind of force, ambivalent between the imaginal and the real. She speaks of her sensed perceptions as she repeatedly dives below the sea surface. She sets out with promise and high delight but stays too long. She passes that threshold when coming back would be possible, making a loose association with the nuclear dream and the impossible scramble to return to a world without its waste.

“My body curls and tumbles. It joins the pock-marked hard things that roll along the bed. We’re a pulse of moving things. Another brush of something like dust. My skin starts to bleach with it. I’m burning, down here with no light, no air … I cool my body in a garden of soft-skinned creatures … Everything moves, the living with the dead. Lives within lives. Our cells are the lenses through which we see our futures. We are all transparent to the longer waters of the sea … ”

The uranium was pulled by brown hands from hot, dusty places, fabricated and made into rich pieces of tradeable merchandise. The military sent those high-priced shells out over the miles of waiting water. In the instant that they touched the sea surface they were waste. As they bedded into the soft sands, they began their dissolution into sea salts and the human imagination. ‘the sea cannot be depleted’ takes off from what seems like discrete events, but those events are only part of a long arc that has no end.

‘the sea cannot be depleted’ was written and produced by Wallace Heim, with music and sound composition by Pippa Murphy and the voices of Camille Marmié (Diver), Vincent Friell (Man) and Lisa Howard (Woman). The project was funded by Future’s Venture Foundation, Manchester.

Heim, Wallace (2017). ‘Theatre, conflict and nature’ in Performance and Ecology. What Can Theatre Do? Ed. Carl Lavery. London: Routledge. also in: Green Letters. Studies in Ecocriticism. (2016) 20:3. The journal is behind an academic firewall, and the book is exorbitantly priced. Please email me if you would like a pdf of the article: home[at]wallaceheim[dot]com

A researcher and writer on performance and ecology, investigating how one ‘hears’ enmeshed dimensions of the human and other-than-human and the sonic languages of place.
Read More