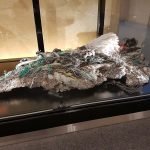 Geographer Martin Mahony introduces work with students using object-based learning to explore the material and intellectual challenges of thinking about human-environment relationships in our new planetary era — and launches a new ClimateCultures feature: Museum of the Anthropocene.

When I was first appointed to my teaching post in UEA’s School of Environmental Sciences I was fortunate enough to be given the opportunity to develop a 3rd–year module on a topic of my own choosing. The only restrictions were that it needed to appeal to the School’s new and growing cohort of geography students, and broadly fit within the School’s long tradition of research-led and problem-oriented interdisciplinary teaching.

Given the groundswell of interest within geography and beyond in the notion of the Anthropocene, and the platform the concept has created for critical cross-disciplinary dialogue about the causes and consequences of global environmental change, I opted to build a module around this new way of thinking about human-environment relationships. I opted too to use the module to introduce students to three vibrant sub-disciplines which, in their different ways, have engaged with the material and intellectual challenges of the Anthropocene, and might be transformed by it: historical, political and cultural geography.

But even with that disciplinary scaffolding, I still faced the challenge of finding something for the students to grab onto; something around which they could focus their intellectual energies, which could situate the usually abstract debate about the Anthropocene in particular places, times and contexts. I hit upon the idea of collaboratively building a Museum of the Anthropocene, into which students would submit an object which they took to be particularly eloquent of the historical, political and cultural transformations which define this proposed new slice of geological time.

That lead me to read into the world of object-based learning (OBL)1, which has grown in popularity as a novel pedagogic practice of putting material objects, rather than texts, at the heart of the learning experience. For many of its proponents, it can transform student engagement with a topic by ‘grounding’ abstract knowledge and theory, and by awakening a wider curiosity about a topic.

Object-based discourse has risen to wider cultural prominence too – witness the preponderance of books and documentaries on a ‘History of X in 100 Objects’. In an Anthropocene context, objects can be a powerful way of grounding and situating an otherwise abstract and universalising discourse, of stressing the intertwining of matter and culture in human-environmental relations, and of helping audiences and students to cut a path through a thicket of historical and political complexity. The ClimateCultures series A History of the Anthropocene in 50 Objects is a wonderful illustration of how objects can help in tracing the connections between the personal and the planetary, and was an early influence on my teaching practice.

My module, ‘Human Geography in the Anthropocene’, runs over 12 weeks. Students are invited to start thinking about an object in week 3, to confirm their choice by week 6, and to be ready to submit their object and some accompanying text by week 9 or 10. We then stage the Museum as a sort of pop-up exhibition, inviting other members of the School to come and interact with the students and their exhibits. Students then have around three weeks to turn their public-facing text into a formal academic essay about what their object tells us about the historical, political and cultural geographies of the Anthropocene.

Thinking our way creatively into the Anthropocene

While object selection is hard, and developing connections and insights into complex academic debates is difficult, students have generally responded really positively to the challenge. It gives them a freedom to explore something that is important to them. Sometimes that comes in the form of a family heirloom – a grandfather’s mining lamp, or a bank note from a Burmese PoW camp – or a person, social movement or work of art that allows students from groups that have been under-represented in Anthropocene discourse to explore the causes and consequences of environmental transformation from a deeply embodied viewpoint.

Other students get interested in the lives and afterlives of certain materials, like plastics, and how – in the form of ‘plastiglomerates’, for example – they represent the literal fusing of humanity with the stratigraphic record. Others home in on the material politics of oil and petroculture, or opt for new or emerging technologies around which new, more sustainable lifeworlds might be built.

I try to encourage students to think and write creatively; to explore the ‘scalar derangements’2 of the Anthropocene that take, for example, the banality3 of the suburb or the strip mall and redefines it as part of the ‘terraforming assemblages’4 that are remaking the planet with troubling consequences for human and nonhuman life. Sometimes the exploration of those connections and derangements can be deeply troubling, but throughout we emphasise – by leaning heavily on Bonneuil and Fressoz’s excellent The Shock of the Anthropocene5 – that the environmental crisis is not an accident. Nor is it the result of ‘human nature’ or even some inalienable nature of capitalism. The Anthropocene was not the inevitable outcome of human ‘development’, but was rather a product of political choices, made by people and collectives in particular places and times. We explore the politics of historical responsibility and blame6, but the overall point is the historical contingency, the non-inevitability, of the Anthropocene.

As such, to explore the agency of objects is to explore human agency too. To examine, for example, how a technology as seemingly simple as an oil barrel has helped shape economic markets, political movements, and even democracy itself7, is also to examine how our socio-material world has been put together, and how it might be remade. So while our Museum of the Anthropocene can sometimes resemble the wreckage growing skyward at the feet of Walter Benjamin’s ‘Angel of History’8, we emphasise throughout that the Anthropocene could always have been otherwise, and therefore that it still could be otherwise. To break the Anthropocene down into some of its constituent and material parts, we can begin to imagine how it might be put back together differently.

Dr Martin Mahony is Lecturer in Human Geography at the School of Environmental Sciences, University of East Anglia, and a member of the Science, Society and Sustainability (3S) Research Group and the Tyndall Centre for Climate Change Research. He has published two co-edited books: Weather, Climate, and the Geographical Imagination (2020, University of Pittsburgh Press) and Cultures of Prediction in Atmospheric and Climate Science (2017, Routledge), and is currently working on Anthropocene for Routledge’s Key Ideas in Geography series, expected in 2024.

A human geographer interested in the contemporary politics of climate change, how future atmospheres are imagined, constructed, represented and contested and historical geographies of environmental knowledge-making.
Read More