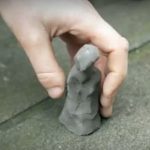 Artist Scarlet Hall debuts her poem You, familiar — narrated over photos of clay sculptures used in a Coal Action Network action outside a government department in London, and accompanied by text from fellow CAN activist Isobel Tarr.

We’ll never know who they are

We’ll never know who they are.

Neither will the politicians and energy company executives whose actions cut their lives short.

We only know that there are approximately 2,900 of them. Those who lose their lives every year that we keep burning coal in the UK. And many, many more who live with respiratory and cardiovascular diseases as a result of coal.

We felt that perhaps the faceless figure, ‘2,900’, had helped render them invisible.

No stories to tell about them, no way to directly attribute the particles in their lungs to a power station.

They are imaginary. But they are also real.

Also imaginary is the end to coal. At this time, it is an idea: an ambition, a promise, a dream. And as it continues to not happen, the impact on people’s lives continues to be real – the people hosted within that number, 2,900, and many more.

Our impulse was to hold a space for their real-ness; the solidity, the personhood of those 2,900. To hold that against a political and bureaucratic structure which relies on that human consequence to be kept at a distance.

This piece was also a challenge to ourselves. How to honour each life? How to let each person speak?

How to be led by those who are on the front lines of this destruction.

How to not turn them into our instruments.

When to stop speaking; and hear them.

Coal Action Network has information on campaigns around the UK, as well as Ditch Coal reports and other resources. Scarlet’s video features images by Natasha Quarmby and Ron F, whose Flickr page includes images from this performance (see his Ditch Coal Now! album).

The WeMove.EU  movement has a European wide petition ahead of a vote on 28th April on whether to implement legislation to stop toxic air pollution for coal power stations across Europe.

An artist who co-creates spaces of naming, questioning, healing and desiring in dedication to humans and non-humans who experience intimately the violent consequences of our disconnect.
Read More