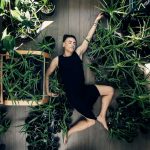 Artistic director and performer Paul Michael Henry, who has devised successive UNFIX festivals, discusses his motivation and ambitions for these international gatherings and explorations, ahead of UNFIX 2019 next month. UNFIX: a command form, a verb, an activity.

UNFIX is a multi-art form festival based in Glasgow, New York and Tokyo. It starts from the proposition that the Anthropocene is happening inside your body, RIGHT NOW. The 2019 Edition is scheduled for 29th-31st March at CCA Glasgow.

I started UNFIX in 2015, looking to ‘Climate Change’ like a lightning rod for the vague and specific discomforts about this society that have plagued me all my life. People keep mis-labelling it ‘Unfixed’ or ‘The Unfix’ but it’s UNFIX: a command form. A verb and activity.

A loosening, disburdening, freeing-up. Anti-fatalistic, with the assumption that it doesn’t have to be like this. I experience climate change as a terrible affirmation: we cannot treat each other, ourselves and our surroundings this way. We can’t walk around with these egos functioning the way they do, and live.

When the ‘Banking Crisis’ hit in 2008 it occurred to me (and others I’m sure) that it could just as well be called the Banking Opportunity. With the cracks briefly showing, it could be a moment of vulnerability for finance and late capitalism, a gap in the concrete where something new could spring up. The fact that it wasn’t speaks simply to the aggregate level of human consciousness at that time. We were not awake enough.

I’m a Glaswegian artist whose work tends to focus on the body — specifically, the body as an ecological reality traumatised by, and intimately connected to, wider currents of politics, patriarchy, capitalism and climate change. I’m also interested in the body’s ability to soften these by love, connection and embodied understanding. I’m uninterested in finger-pointing, and am probably some kind of mystic at heart.

Actually part of that is a lie. I’d love to finger point, and sometimes I do. Jump up and down and rail at the capitalists and the patriarchs and the selfish and the sleeping, righteously righteously. Weep publicly, perhaps on TV, cradling plastic smothered turtles in my too late saviour’s arms. But climate change really isn’t about me and a wiser part of me knows that. It swallows me and I need to reckon with it, I live inside it and it shames me and prompts me to act.

When I don’t live in alignment with my values (which is often), a rat gnaws my stomach. The rat is tamed when I take actions with my whole being, like starting a festival for misfit artists to say what’s burning in our gizzards and draw what attention we can to The Situation.

The first UNFIX happened because a wonderful venue (the Centre for Contemporary Arts in Glasgow) was foolish enough to give me the keys to the building for a weekend. I was living in a camper van at the time, completely skint and dreaming. We teamed up, dozens of artists and activists, nobody getting paid, and we staged performances and film screenings and debates and ate together at another great venue (the Project Cafe) who made us all food from ingredients foraged in Kelvingrove Park. It felt a bit explosive. People still tell me how it affected them, boosted their resilience. I dunno. I’d like to think so.

But I mean: it’s art. The Situation persists. I throw my tiny actions and those of the artists involved in UNFIX on the pile, to be added to the older generations who saw this coming (the Joanna Macys, the Alastair McIntoshes) and the younger just now exploding in beauty (the school-age climate strikers). Outcomes are unknowable so I align myself, not sure, opting — as Alastair is fond of saying — to “Dig where I stand.”

So what about the Climate Opportunity? I don’t think shouting at Trump is going to be enough, though it is surely a part of it. But when I project all my climate rage outwards I’m being dishonest. I think that all of us raising our levels of awareness, radically –individually, in small groups, in large groups, in continental blocks, in cross currents and collaborations, and in the owning of our own shadows — CHANGING OURSELVES from the inside out, might make a difference.

I don’t know what our chances of survival as something resembling the human species are, and I’m agnostic about whether we deserve it. I’m to blame and you’re to blame and everyone is confused and the most ignorant and ego-driven have the most power and will kill us all if we let them. OK OK. The Situation. Perhaps we should just get to work?

This year’s UNFIX Festival has some (a little) money behind it. For the first time I have a budget and producers and paperwork, and people to account to afterwards. And I can pay the artists taking part, more or less. All of which makes me nervous because it dilutes my standing as someone powerless and shouting on the sidelines (my strongest suit). It’s not much power, mind.

If I were king, I would outlaw the term Consumers. Swap in the word Organism, or System, or ConsumerDigesterExcreter. I would have mandatory shit cannons primed for every time someone says ‘Economic Growth’. All would bow down before my solutions. Righteously Righteously.

I am not king, thankfully, signing on instead each day as an average-extraordinary worker bee in the Anthropocene: of unique gifts and no special importance, grief-stricken and hopeful and sometimes sick and faltering and giving up and starting again.

Who looks out through your eyes when you think about climate change?

Paul Michael Henry makes performances that, most of the time, end up on a stage, but he also makes recorded music and films and collaborates on other artists’ projects. He is artistic director of UNFIX Festival and teaches dance workshops called The Dreaming Body. His themes are political, social and spiritual, dealing with love, neglect of the body, destruction of the environment and atrophy of the soul in consumerist society.

UNFIX 2019 is scheduled for 29th-31st March at CCA Glasgow. It will feature contributions from local and international artists and organisations including Minako Seki, Alberta Whittle, Chistiana Bissett, The Workroom, Extinction Rebellion, Creative Carbon Scotland, Niya B, Ruaridh Law, Verónica Mota/Urban Arts Berlin, VID art|science, Yulia Kovanova, NIGHTPARADE, Katrine Turner, VIDIV, Adam Fish, Paul Michael Henry and The Dark Mountain Project. You can discover more at www.unfixfestival.com. Tickets are on a sliding scale and can be purchased from the CCA website.

A performance maker whose dance, music, ritual and writing deal with love, neglect of body, destruction of environment and atrophy of soul in consumerist society.
Read More