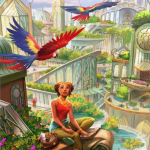 Writer Mick Haining discusses the role of stories in helping to bring about change to mobilise, not paralyse, the XR Wordsmiths group that he’s part of, and their call out for new Solarpunk stories that give us hope.

Stories form and change the way we think and therefore act. The ‘stories’ we are told as children by our family tell us about our relatives, our neighbours and the place in which we live and we form attitudes and behaviour as a result. Growing older, we read and watch TV — we may not fight in Vietnam or Yemen but the stories we swallow help us decide who the ‘good guys’ are. Reality at times makes us doubt the veracity of some stories but never all. There’s a difference, of course, between stories that constitute our communication of events to one another and stories that are deliberate works of art. It’s the latter I deal with here. (As an ex-teacher, I became used to student excuses that were clearly works of fiction but not intended as works of art…)

Clever stories can shake earlier beliefs — I was OK as a young man with capital punishment until I read Truman Capote’s In Cold Blood. Stories may be warnings about what to avoid. The 1966 film War Games by Peter Watkins showed graphically and horrifically what could happen in the event of a nuclear air-strike on the UK — it seems credible that it and two subsequent films, Threads and The Day After, have actually helped the planet avoid a nuclear conflict. Stories, though, can also show us not just what to avoid but a goal to aim at.

Promoting our bond with life

The human race, steadily and somewhat blindly, has been creating the conditions for a future about as bleak for the whole planet as a nuclear war would create. There’s a growing sense of how cataclysmically awful that might be from an increasing number of ‘stories’ in the media and in art. That in itself might prompt some to change their lifestyles — even from a sample of only 100 U.S-based readers, a 2018 Yale study found that climate fiction (‘cli’fi’) nudged readers “in a slightly more progressive direction”. However, the same study concluded: “​From the emotions these readers described, it is clear that their affective responses were not only negative but demobilizing.” For us — humanity — to find a way to cope with and maybe mitigate the climate extremes that we have already locked in, we need stories that will not paralyse but mobilise. We need stories that will give us hope, stories that will not just ‘nudge’ but inspire readers to act in ways that show respect for the nature without which we could not possibly exist. We need stories to help us create societies that appreciate and promote our indissoluble bond with life in all its magnificence on the only planet we have.

That’s where Solarpunk comes in. I am a writer with XR Wordsmiths and we are launching a showcase for writing stories in that genre. Some of you may be in the position I was in a few months back — despite shelves full of books and an age full of years, I had never heard of Solarpunk. To save some of you the trouble of looking it up on Wikipedia, their definition is that “Solarpunk is an art movement that envisions how the future might look if humanity succeeded in solving major contemporary challenges with an emphasis on sustainability problems such as climate change and pollution”.

I’ve personally never written anything myself in a purely Solarpunk style though I did write a series of short stories set in the quite near future where I imagined a small group living on a very small peninsula who were rediscovering skills that instant meals and supermarket shopping had eroded. Their names relate to what they contribute to the community — the central character is ‘Reader’ and there’s Little Crabber, Big Fisher, Cobbler, Wireman, Knotter and a pile of others. It’s a little like Russell Hoban’s Riddley Walker though set much, much closer to the present day and thus the mutations of cultural conventions are in their infancy — the local bandits are called ‘vikings’ even though they know all about horses and nothing about ships. In the first story, ‘Easter’, the hero’s daughter sings a Christmas carol…

It isn’t that the characters have “succeeded in solving major contemporary challenges” but they have found a way of surviving that doesn’t just bring constant fear — Reader still finds time to read to his daughter and on the extraordinary day when snow falls for the first time in the lives of most of the inhabitants, there’s a snowball fight and a snowman built.

Solarpunk — writing as hope and defiance 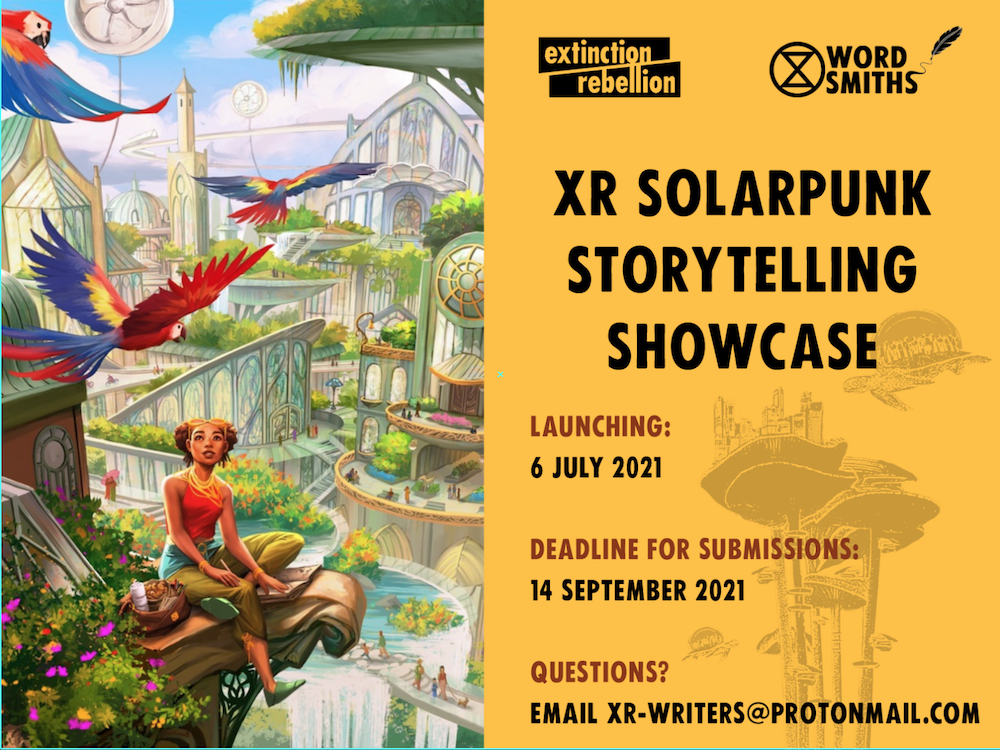 For our XR Wordsmiths showcase, we say that: “whether you are totally new to the world of eco-fiction or a seasoned enthusiast, this contest is open to any adult, teenager, or child who wants to combine their passion for writing with getting the message out there about the climate and ecological emergency.”

Maybe, like me, you don’t quite have the nerve — yet — to be arrested at a demonstration. That’s probably why I’m with XR Wordsmiths. There are several dozen of us but only a small core of about half a dozen get together via Zoom every Sunday at 4.00 p.m. to work out ways of welding words that might move people to rise peacefully and effectively against the authorities that seem to move like sloths in relation to the climate and ecological emergency.

We were XR Writers for a while but there’s another group of XR Writers who are actually published authors so we gracefully changed our name to avoid confusion and better match our work — we write letters, slogans and we’re even on the verge of completing a book for publication, a gardening handbook, in fact. If that seems a little odd as a form of rebellion, our intention is not to teach people how but to persuade them to take gardening up as an act of hope and defiance — you don’t plant a seed in the belief that it will never germinate. If any of you reading this want to join us on a Sunday, you’d be most welcome!

But here, then, is your chance to rebel through the Solarpunk Storytelling Showcase. This is your chance to put pen to paper and to put people on the path to a better future than might be the case. You may not find many or even a single, complete answer to all of the problems we have been piling up but, as an Al Jazeera piece in 2014 declared, “this is a life-or-death situation now, one in which even partial solutions matter.” So — tell us a story. Transform our futures, one word at a time…

You can submit as many stories as you like to the XR Wordsmith Solarpunk Showcase, there are three age bands and the word limit is 2,500. Submissions do, sadly, have to be in English at present but subsequent years may differ. The submission deadline is 14th September 2021.

You can find full details of the open call for stories (and a few prompts to get you started) at Solarpunk Storytelling Showcase — which also links to a Definitive Guide to Solarpunk from Impose Magazine, exploring fashion, architecture, technology, literature and more. You might also like to read At the very least, we know the end of the world will have a bright side, a 2018 Longreads review of the growth of solarpunk, Solarpunk or how to be an optimistic reader at The Conversation (19/7/19), or A Solarpunk Manifesto (2019). Inside the Imaginarium of a Solarpunk Architect (10/6/21) reviews the work of Belgian architect Luc Schuiten, one of whose images is used in this post.

The winning entries will be selected by a panel of judges that includes eco-poet, writer and ClimateCultures member Helen Moore (who wrote about her own writing practice in our recent post Wild Writing: Embracing Our Humanimal Nature), children’s climate fiction writer Gregg Kleiner, Ecofiction YouTube vlogger Lovis Geier, and Green Party politician Zack Polanski. Winners will have their stories published in the XR Global blog and on the Rapid Transition Alliance website. Other prizes include three £1000 scholarships to the world’s first global online climate school terra.do.

You can explore XR Wordsmiths via their site and blog (get in touch via xr-writers [at] protonmail [dot] com), and Mick also mentioned XR Writers, whose work is featured on the main Extinction Rebellion site, including a podcast.

There is also XR Creative, an evolving anthology of songs, fiction and poetry that’s inspiring, meaningful and original, and that reflects the principles, concerns and values of the Extinction Rebellion from a global, regional or local perspective. You can read three of Mick’s Tales from the Nab at XR Creative: Easter, The Journey, and The Flare.