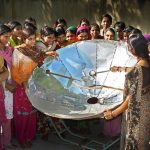 Film-maker James Murray-White captures the energy and inspiration of a busy summer learning, engaging others and sharing their stories, recalling four very different events: a climate visuals workshop, a regenerative activism retreat, a performance and a coastal encounter.

“I pondered all these things, and how people fight and lose the battle, and the thing that they fought for comes about in spite of their defeat, and when it comes turns out not to be what they meant, and other people have to fight for what they meant under another name…..”

I’m writing after a stimulating Masterclass on Climate Visuals, run at the Thomson Reuters HQ in London by the Oxford-based climate NGO, Climate Outreach.

The event was titled ‘Catalysing a new visual language of climate change’, which is no small task, and by the day’s end the 30 or so participants had run the gamut of emotions examining a wide range of images, discussing them in small group exercises, and hearing from climate photographers and editors about finding and choosing stories and images.

I principally work with moving images these days, though my first creative medium was photography, and this masterclass again brought it home to me the importance of analysing images for human/non-human content, and how a story is told through the visual image.

Telling the story of climate change, with its impact upon the world and its tragic impact upon humans, often the world’s poorest and most vulnerable of society, needs to be done sensitively and with compassion; and the day kept coming back to both the ethics of featuring people caught up in the effects of climate change, and to the importance of understanding how the image and possible caption and accompanying article can find an audience. As journalists and creatives working to create change, we can ofttimes never know how an article, an image, a film or a play will land in the audience’s imagination, or what it may trigger.

Climate Outreach’s Research Director, Adam Corner, opened the day by setting the scene and mapping the landscape, through a diagram of the ecosystem of imagery: its generators and users. The NGO has excelled in its research in this area, outlined in a set of seven principles for climate change communication, from showing ‘real people’, through to ‘understanding your audience’. An ongoing debate, which continued with a colleague on the train home, was the use of polar bears in early and current images to represent the alienating effect through habitat destruction of climate change.

In any day-long course, or masterclass, there is always so much knowledge to share and stories to hear, and this was no exception. Climate Outreach and its dynamic team have been engaging deeply with this medium of knowledge transfer and change and, crucially, are creating the network to shape the future through careful and deliberate image choice and placement to sway opinions and support crucial debate and journalism.

At the other end of a spectrum of group dynamics, I was fortunate to attend a week-long retreat on Dartmoor in July titled ‘Regenerative Activism’, run by a team from the Buddhist Ecodharma centre in Spain.

This was a powerful group-learning experience – we were taken on a deep ride through our experiences as activists of all kinds and given powerful tools to support ourselves, understanding power in our groups and those we may stand against: burnout, privilege, inner criticism and everything that may stand in our way.

The week was at times challenging, but a crucial, urgent, regeneration. I was privileged to be in a group that included climate activists who have risked their lives and gone the extra mile for action and laws on climate change worldwide. Tried and tested exercises gave us all the chance to see and reflect upon our work and the passion that drives activism, testing this from many sides to see and feel both the flaws and the glorious altruism that drive our need for change, whether from hurt, weakness, or something else within. I’d highly recommend the work of the Ecodharma team – they are deeply engaged individuals who use the buddhadharma to enhance and enrich lives where they can.

The retreat was managed and hosted by a wonderful group of skilled meditators who offer retreats ‘freely’ to enable anyone to grow.

Back to my work, motivations and the place I work within, and the City of Cambridge remains a sphere of education, growth, and a catalyst of climate and social justice knowledge.

Pivotal — life in a flat land

It is a place of tradition and growth, but we live on flat land: an entire region of this tiny island that is highly susceptible to floods. The image below is a projected map of East Anglia, with coastal erosion taking away a huge swathe of Fenland from the Wash; cutting through Kings Lynn, Downham Market, Peterborough, the area where poet John Clare explored the treasures of nature, Chatteris, and the prime agricultural lands right up to the gates of the newly-titled ‘Silicon Glen’ that is Cambridgeshire. Only from the Ivory towers of academia will we be able to look out upon this once fertile landscape.

In the city, Pivotal is one initiative trying to bring together town and gown to find solutions and share experiences on climate and social justice, mainly using the prism of the arts. We’ve had lots of successful events and a mini Festival to find ways of engagement.

Pivotal is teaming up with many of the NGOs across the county who also look at issues of environment, community and sustainability, such as Transition Cambridge, Cambridge Carbon Footprint, Fulbourn Forum and other village parish councils and groups, to run a season of films, events and speakers in February 2018: ‘Films for our Future’. Watch this space for a full timetable. We’re finding that teaming up with all the expertise and crossover here, while learning from similar festivals in Totnes and Reading, brings a world of resource and energy into one concentrated space – to make change happen.

On darkness and doing

Over in Reading, I got to see Festival of the Darkness director Jennifer Leach’s performance piece Crow recently: “Whoah”, is all! This is a creation myth that hits you in the stomach; with searing sadness, and an eternity of tension between the figure of Crow and Hollow Man, I felt a personal sense of despair in looking at our humble humanness not felt since seeing a Samuel Beckett play. There are moments of beauty, and real insight: clowning; a chorus that observes, entices and engages. Crow’s mother, who sways through, brought up some grief for the loss of my mother this year, as well as a sadness at the sly dexterity that is at play amongst humans: we can love and laugh, cry and die, and can try to resolve and understand issues, though still we maraud and pillage natural resources as if we own them, and howl at the terrible consequences.

Thinking this thought further, I’m delighted to share that following our highly successful provocation at the life-changing TippingPoint Doing Nothing is Not an Option conference in Warwick last year, where so many of these connections were made and interlink across culture and activism, stage designer Andrea Carr and I have been talking about reprising our Doing Nothing is Sometimes an Option event – giving participants an opportunity to dump all their baggage at the door and enter a space of rest, mindful exploration and tuning in to sensory being. Participants at DNNO might well remember the glorious prism that showed up for us. Watch this space for more!

During a filming project recently, I visited the Norfolk village of Happisburgh, which has suffered the most extreme coastal erosion of our entire island, and successive governments ‘giving up’ on their efforts to protect the land from the violent surges. After an hour of filming in the iconic lighthouse, as the volunteer warden locked the door and I packed up cameras, I asked him “So what’s your take on the erosion here?” He pointed to the field we stood beside, and angrily responded “This was entirely flooded just three years ago. The next time the sea will wash into the Broads and contaminate that. These houses won’t be here. This lighthouse will be beaming its light as an island in the sea.”

This close-up and personal engagement with the reality of change, in the midst of doing other things, reinforces for me the need to keep making connections, writing and filming these issues, finding images and creating footage to highlight all the stories of our time. I went from this conversation to the church, and met a church warden who had moved into the village some seven years ago, in full knowledge and sight of the potent destruction of the sea defences, some of the cliffs and some of the property in the community. For her, faith and church involvement sustains.

“Caring for myself is not self-indulgence; it is self-preservation, and that is an act of political warfare.” – Audre Lorde, A Burst of Light, 1988

In the theme of spiritual inquiry and the buddhist practice of cultivating bodhicitta, I dedicate this writing to all those affected by climate change over the past few months, in the USA, India, and worldwide. May all beings find peace.

Explore Ecodharma Centre and their Freely Given Retreats.

You can read a local press article on the possible scenario illustrated in the map above: How rising sea levels could change the shape of East Anglia.

And there is a Geographical article about erosion at Happisburgh, Norfolk’s disappearing village.

James is a member of the Pivotal – Cambridge Festival Of Change team and you can see some of his work on Vimeo.