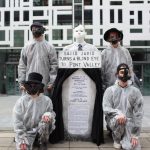 Artist Ottavia Virzi describes a recent intervention by Art Rise Up, the creative collective bringing art and activism together for environmental protection, in support of the campaign to halt opencast coal mining, using art to engage cultural meaning.

How to realign our creative practice in support of effective actions, aiming to help achieve some steps in the process leading to a fairer society? As creatives, feeling this need can lead to different paths: paths that can be centred on raising cultural awareness, or be part of a sustainable design process, or can look at the bridges between art and activism. We are interested in testing this last option inside the collective Art Rise Up. Approaching activism can be an uplifting experience for those looking to direct ways to have an impact, overcoming the sense of frustration and disempowerment that is felt by so many citizens today. Our creative intervention in support of the direct occupation of Pont Valley started from this common need we perceived, to use our creative skills to directly support a significant environmental campaign.

A direct occupation of the valley has been taking place from early March until eviction last week, but the campaign is however motivated to stay strong.  A campaign lasting decades for some members of the community, trying to stop an invasive open-cast coal mine from opening right in front of the villages of Dipton and Leadgate, County Durham. A campaign felt ever more strongly today, right when England is committed to coal phase-out by 2025, in an areas which has been historically exploited for coal.

Coal is the symbol of many countries’ slow response in tackling the climate crisis. Moreover, the impact of coal on local community is extremely high, due to coal dust produced through the distressing excavations. A petition signed by 88,000 people regarding the Pont Valley mine was brought to the Home Office in February and ignored by the Ministry of Housing, Communities and Local Government. Sajid Javid, the same Tory HCLG Minister — just appointed Home Secretary — who recently denied permission for another mine — at Druridge Bay in Northumberland, on the grounds of climate change and implications on health and wildlife — did not react regarding Pont Valley. The same private energy company, Banks Group, is involved in both mines. This scenario underlines the conflicts between private corporate interest and governments, who are not able to pronounce a complete and definitive “no”. National usage of coal power has diminished in England, amounting to 8% of the energy mix in 2017. But the continued dependency on cheap polluting energy is a direct consequence of our economic system — based on boundless consumerism — and the lack of extensive policies reforming energy usage through real investments in renewables and energy efficiency, and of a brave discourse regarding the need to re-adjust energy demand. This does not mean de-growth seen as a step backwards, but rather as a different growth and a step forward.

All of these thoughts informed our decision to organise ourselves into a collective which could keep supporting the campaign in London, where our life as creative freelancers often means compromises in a constant search for balance in our actions.

The task we gave ourself was to create something simple and efficient, to give a shape to this large amount of information on the issues in the form of an artistic intervention which could also try to help to influence directly. The exercise of art is after all an attempt to condense communication, and give it tangible cultural meaning.

With the use of a critical neo-classical bust, we decided to underline the responsibility of governments and power figures in handling the climate crisis. This is a call for politicians to re-think the meaning of providing community welfare beyond exploitative models.

Our installation consisted of a clay bust picturing Sajid Javid — empty black eye cavities, and coal around him — and a plaque referring to his controversial silence regarding the Pont Valley mine. In the plinth, built-in speakers were emitting sounds of birds chirping with overlapping industrial sounds of excavators.

The statue has been officially unveiled in front of the Ministry of Housing, Communities and Local Government. Direct action and artistic intervention can share with theatre a performative key, which is increasingly used in protests. We decided to unveil the statue in a ceremony with four officiants wearing masks inspired by Pont Valley wildlife – Skylark, Crested Newt, Pont Burn River, and Gorse Bush. These masks to represent a wider community of people and living beings behind our actions. Mining and burning coal harms the smaller creatures in our ecosystems as much as human communities worldwide. 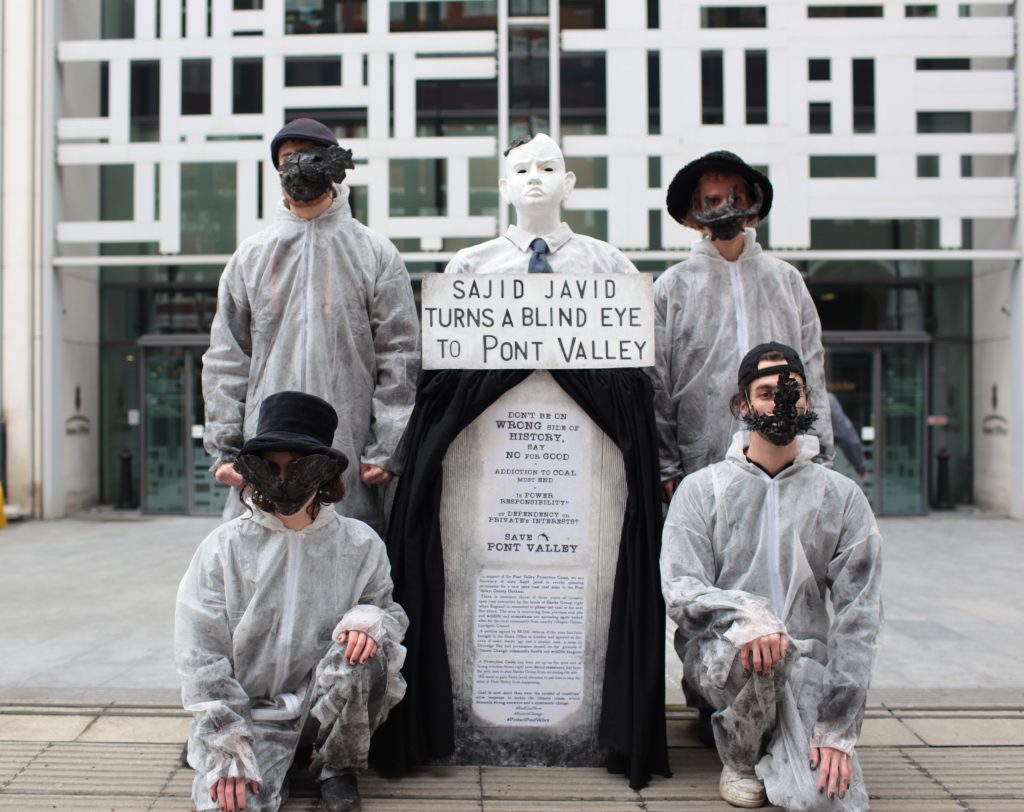 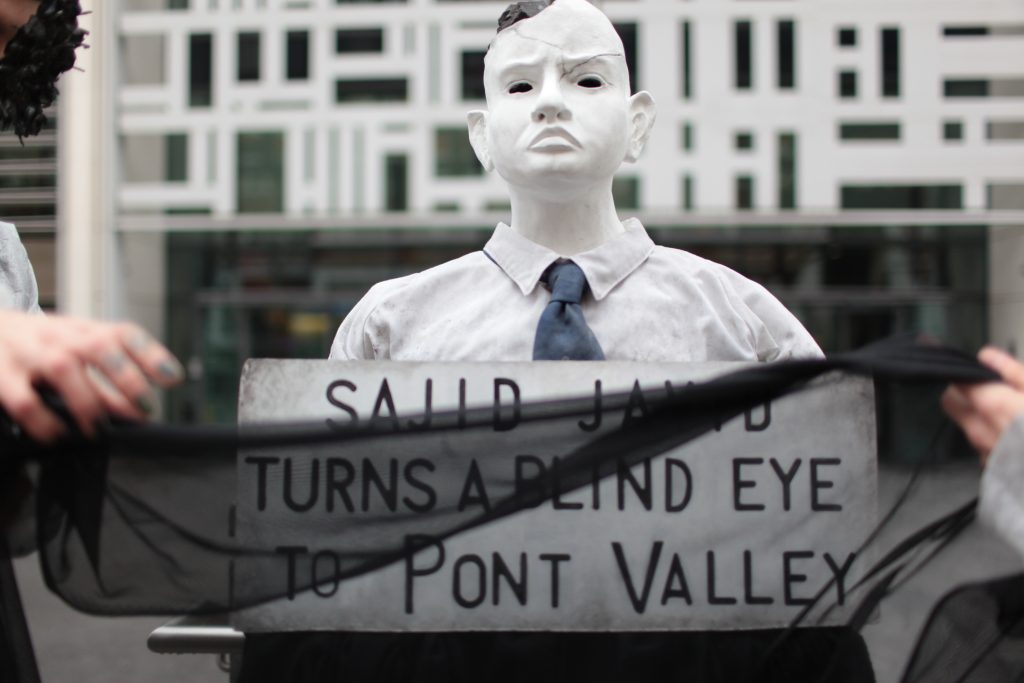 Our intervention didn’t manage to change Sajid Javid’s mind. The Pont Valley Protection Camp was evicted last week. Banks Group are even planning to appeal against the Druridge Bay decision. What this little journey helped us discover though, is how committed and motivated is the movement behind environmental campaigns. How a small example such as a coal mine in County Durham and a larger perspective necessarily live together. How the journey will still be long, with countless the campaigns to fight. How important it is for all to embark on this journey to adjust the system, from politicians to countryside dwellers, to city workers and artists together, committing to spread awareness and give shape to a real plea for change.

Art Rise Up has a Facebook page and intends to promote and share contents about Art and Activism.

You can learn more about the open cast coal mine at Pont Valley and the campaigns to prevent it at Coal Action UK and in these articles from The Ecologist, BBC News and Chronicle Live: Protecting Pont Valley: meet the protesters fighting a new coal mine (28/3/18); Dipton opencast mine protesters in underground tunnels (20/4/18); All the opencast campaigners kicked out of protest camp after 33 hour stand off with bailiffs (20/4/18).

A set and costume designer focusing on sustainability, heritage crafts and social history, and associate artist with Art Rise Up, a group merging art and activism.
Read More