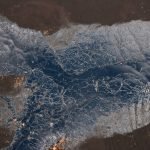 Interdisciplinary artist Andrew Howe shares three objects that chart material flows in time. Slipware pottery, an acorn and a bitumen spill offer fragmentary stories entwined with present experience and imaginings of past and future in the same moment.

The recording of history is a collective narrative of personal memories and subjective interpretations of objective data. And memories are the internal stories we create from fragments which become entwined with present experience and our imaginings of the future, always in the same moment. As I thought about identifying objects from the past, present and future, I could only see them as materials on a journey flowing through time. This flow need not be considered as a linear process but as a cycle, perhaps a little like the river cycle, in that all time can co-exist simultaneously but in different locations.

Based on my recent experiences out walking, objects that represent the Anthropocene in the present time, perhaps more than any other, are the proliferating numbers of discarded face masks and discarded dog shit bags (DDSBs) lying on pavements, spilling out from litter bins or festooned from trees and bushes. But I wished no connection with these objects, whereas each of the three objects I selected have specific resonances for me with the past, present and future.

My first object is a fragment of brown slipware pottery, one of a handful I gathered last year while mud-larking on a pebble bank at the edge of the River Severn, downstream of Shrewsbury town centre.

An informed acquaintance suggested to me that the brown and amber pieces were most likely 17th or 18th Century combed slipware. I was intrigued by its unknowable journey from formation of the clay, very likely a result of glaciation, and extraction for making into a pot. It was then used in someone’s house in Shrewsbury, maybe even one of the Tudor timbered mansions that still stand in the town centre. At some point it was lost and broken and found its way into the river. Over the years, it has been washed downstream, gradually rounding off the edges until I picked it up. How will my intervention change its course of flow?

Ruptured nature in peatbog and bitumen

I encountered the second object whilst researching a project at the Fenn’s, Whixall & Bettisfield Mosses National Nature Reserve, the UK’s third-largest raised peatbog. Within the wetland nature reserve, there was a car breaker’s yard that operated for many years until the site was taken over by the Shropshire Wildlife Trust. The stark juxtaposition of the scrapyard against the remote wetland landscape had fascinated me for some time.

Shortly after many of the crushed cars had been removed from the site, I made a visit to observe the mountains of remaining tyres and thousands of mangled fragments of plastic and metal car parts. I collected these like archaeological finds. Then entering a thicket between the scrapyard and peatbog, I saw a large bitumen tanker part-suspended in amongst the trees, as if it had been driven in at speed and simply left.

When I returned a few months later, the tanker had been separated from its cab and moved, as part of the ongoing clean-up process, to a position on the concrete hardstanding in the main scrapyard, which was being cleared for restoration by covering with topsoil. In the warmer weather, the bitumen leaked from ruptures in the rusted steel carcass and spread out in mesmerising black pools, its ‘skin’ intricately marked and rippled.

Bitumen can be found naturally or produced via the fractional distillation of petroleum. This natural hydrocarbon seemed to be reaching out, as if trying to recombine with the peat below and complete a cycle interrupted by human processing. The sculptural tanker is a powerful artwork in itself, symbolic of the human exploitation of petroleum and car manufacture.

In my early discussions with the Shropshire Wildlife Trust, there was general agreement that we, as a society, should take responsibility and acknowledge the legacy of human impact on the environment, perhaps by leaving some of the dereliction in place. However, while bitumen is widely used as a construction material, it has some chronic toxicity, it is a potential carcinogen and the tanker was regarded as a hazardous waste. The metal structure was also regarded as unsafe, so the decision was regretfully made to retain the tanker on the concrete and cover it with soil as protection.

Acorn to oak, and uncertain futures

The final object is an acorn. This particular acorn came into my possession during a heritage project where I was trying to locate trees more than 200 years old in Telford; trees that could have been witness to the battle of Cinderloo, an industrial dispute in 1821. Around 3,000 miners marched in protest against savage wage cuts and they shut down ironworks before coming into conflict with the Shropshire Yeomanry, resulting in two fatalities and nine arrests, with one man hanged for felonious riot.

There are many woodlands in Telford, growing over the ruins of industries that date back to the start of the Industrial Revolution. Only a few of the trees are as old as 200 years though, so the acorn I collected from one old oak in Coalbrookdale provided me with the potential to create a special connection. By planting the acorn, it may grow and live on beyond a normal human lifetime to make a connection spanning between the origins of the Anthropocene and an uncertain future.

The centuries-old relationship between the English and oak woods is at the heart of national identity; once integral to peasant livelihoods, Royal hunting forests and naval shipbuilding. Oak has abundant uses as a strong and durable construction timber, as fuel, as animal fodder, for the tanning of leather and in production of ink, but its value is increasingly recognised for sequestering carbon and sustaining biodiverse flora and fauna in its branches and in its root systems. Humans will need to rebalance the values of oak between a commodity and as a living guardian, if we are to begin regaining some harmony with the more-than-human for our own survival.

You can explore Fenn’s, Whixall & Bettisfield Mosses National Nature Reserve, and the Marches Mosses of which it is a part, at The Meres and Mosses site. And you can find out more about Andrew’s own work with the Mosses and Marshes project at Of the Mosses. including an introduction to the site: Tracing Human history across the Moss.

Bitumen, a sticky, black, highly viscous liquid or semi-solid form of petroleum, is also known as asphalt, and is mainly used in road and other construction, although its natural form was historically used for waterproofing and as an adhesive as far back as 5,000 BCE. Runoff from roads can cause water pollution from bitumen and, as this article from MedicineNet explains, Hot asphalt causes a lot of air pollution. “As it heats up, asphalt releases chemical compounds that contribute to air pollution … Sunlight plays a key role in these asphalt emissions, with even moderate levels of sunshine tripling the release of air pollutants.”

You can learn more about the history of the Cinderloo Uprising in Dawley, Telford and the heritage project led by community group Cinderloo 1821.

An interdisciplinary artist and project manager using walking and mapping to explore how people interact with places, drawing attention to human entanglements within a multi-species environment.
Read More