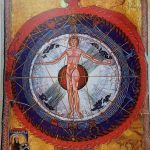 Curator Veronica Sekules shares three Anthropocene objects that mark the movement from a visionary symbol of eternity, to the hubris of a transitory age and on to a time which will be witnessed by what endures after us.

Cosmic Man — among the elements

The first of my personal Anthropocene objects is Hildegard of Bingen’s image of Cosmic Man from her Book of Divine Works (1230 CE). It is a beautiful manuscript page, painted by her in reds, blues, white and gold, depicting a symbolic vision to convey some of the mysteries of Christian belief and devotion. It is full of complexity and for me equally prescient in the age of the Anthropocene as it was in the middle ages.

At the centre is a naked man with arms outstretched among the elements, both demonstrating strength and vulnerability. He represents humankind equally dominating and subservient to the world. Around him, the concentric circles of the universe, moon, clouds, water, animals and creatures, are ultimately surrounded by God, who forms an extended flamelike humanoid figure encircling all, his face (and Christ’s) presiding over everything. Hildegard herself is shown seated, adoring and studious beneath this universe.

This represents a vision which is both humble and hubristic about both the power and subservience of human agency, placing man and god united in ultimate supremacy over the world and the creatures within it. For me this epitomises a major aspect of the genesis of the Anthropocene, and of its problems. Humans are both progenitors and victims, witnesses to the majesty of the world and yet main actors in its fate, good or bad. Even to a Christian believer like Hildegard, God’s flamelike presence seems to be double-edged, both guarding the universe and warning it.

The second of my Anthropocene objects is a Massey Ferguson TE20 tractor, marketed in Britain and indeed around the world in the 1950s, as part of a ‘New Elizabethan age’ of innovation in farming. It had over 60 different attachments and was a pioneering machine in the burgeoning oil-fuelled, carbon-consuming history of mechanisation, which was seen then to lead to greater wealth, power, profits and plenty for all.

Very rapidly, the TE20 was superseded by ever more powerful and giant machines for land management, crop spraying and harvesting, but it was one of the first signs of all the panoply of tools and chemicals which changed post-war farming and have accelerated the devastating effects of climate change and been so dangerous for nature. Farming is still seen, even increasingly, as a global agribusiness in an intensely greedy and competitive way, and machines to manage greater stretches of hedgeless land are still seen as its future. The Massey Ferguson was an icon of its time and has now been consigned to history — or indeed heritage, making appearances at vintage tractor events, but it would be good if its oil-age descendants could join it. I still hope and believe that alternative, equally innovative, but less polluting farming futures are possible.

My 10 year-old son Jack’s stone won the prize as the most beautiful. It was the one we wanted to keep. So we put it in a really obvious place ready for when we returned, while we went round the bay to continue our walk. On our return, could we find it? It took two hours of painstaking, detailed, careful scrutiny. For, distinctive as it was, it blended perfectly back into its landscape.

Finally, in triumph, we found it and once again it seemed so obviously the best of stones. Subsequently, it has become a metaphor for us, both for beauty, and for ordinariness, for how something distinctive can blend into the norm.

It is now removed from its natural habitat, so it has become more of a heritage phenomenon. But equally, as a piece of metamorphic igneous rock and originally from deep inside the earth, it is witness to enormous change, to heaving movement of the planet more than 2,000 million years ago. It has endured long before human history, and the cousins of this stone remaining in the environment will continue to do so, imperceptibly changing, long after we have gone. So for me, as an object of the Anthropocene, it is all about a world which will outlive us, no matter what damage we effect.

The life and work of Hildegard of Bingen (1098 – 1179), Benedictine abbess, visionary, preacher, writer, composer and Saint, is explored in this Wikipedia page, and there is an interesting article by Mary Sharratt on Huffington Post, 8 reasons why Hildegard of Bingen matters now.

If you‘d like to know more about the innovation of the Massey Ferguson TE20, Farm Machinery website has a short article celebrating the 70th anniversary of the tractor that changed the world of agriculture. And taking the longer view, an episode of the BBC World Service series 50 Things That Made the Modern Economy discusses the impact of the Plough.

Among the wealth of stone-related materials you can find on the web (and the real things, outside your front door, on the beach, in the hills, fields or woods, and in town and city), BBC Radio 3’s The Essay recently broadcast Cornerstones, a series of five meditations on different stones around the UK from artists and researchers; and environmental humanist Jeffery Jerome Cohen has written Stone: an Ecology of the Inhuman (2015, Minnesota University Press).

An art curator, educator and writer with a background in the environmental movement, who has created GroundWork Gallery to showcase art and campaign for the environment.
Read More