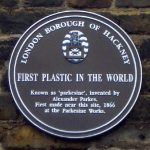 Writer Nick Hunt traces the years through present, future and past on a path that will not stay forever on any one course; and returns us to a longer view, honouring the power and beauty of natural forms.

The years: this seventh generation

On a grubby brick wall in Hackney Wick a small brown plaque bears the words: FIRST PLASTIC IN THE WORLD. It is bolted high on the wall, and few people passing by ever raise their eyes to see it.

In 1866 the empire had a problem. The efficiency of industrial slaughter had surpassed natural capital reserves, and resources once abundant were becoming scarce. Whale oil, used for everything from lighting to industrial lubrication, was in sharp decline due to collapsing whale stocks. It was peak whale oil. But new techniques for extracting rock oil boosted the petroleum trade, and drills took the place of harpoons on industrialisation’s frontline.

Around the same time, ivory — used to make ornaments, cutlery handles, piano keys and billiard balls — was running out as well. It was peak elephant. A substitute was invented by a man called Alexander Parkes: a hard, smooth, synthetic plastic made from nitrocellulose, better known as Parkesine, the first manmade plastic in the world.

(It is one of the stranger ironies of industrialisation: that petroleum saved the whales and plastic saved the elephants. Or at least that was how it seemed, before the icecaps started melting and plastic clogged the seas. Now it appears the world’s largest mammals merely had a stay of execution.)

Parkesine was first produced in the Parkesine Works in Hackney Wick, a zone of London dominated by dyeworks and chemical factories. It was a commercial failure, and the company folded two years later. But other plastics swiftly followed: xylonite in 1869, celluloid in 1870, and in 1907 Bakelite paved the way for mass production, disposable culture and the consumer boom. In its ever-mutating variety — polystyrene, polyethylene, polypropylene, polytetrafluoroethylene — plastic would enter every home, replacing not only ivory but metal, glass, stone and wood, never decaying, never corroding, obsoleting organic matter. It would change the composition of the oceans, working its way up the food chain from bottom feeders to apex predators, and enter the geological record to become part of the planet itself. It’s hard to conceive of a more successful example of market penetration.

That small brown plaque says nothing of this, and most people don’t notice it’s there. But a carrier bag wafts on the breeze, and discarded plastic bottles litter the road underneath, like devotional offerings at the shrine of their creator.

Sun machines: the future for now

I moved out of Hackney Wick years ago and came to live in Bristol again, but inevitably London pulls me back. It means I spend too much time in the limboland between the two cities, going up and down the M4. The view through the smeared coach window is of transport infrastructure, road-signs, scrappy woodlands, fields. But over the course of the last few years this vision has started changing.

The green fields are gradually vanishing from the flanks of the motorway, covered by a tide of grey: row upon row of darkly reflective panels angled to the south, ranks of mathematical squares in place of pastureland. Officially they are called solar farms, evoking bucolic rural scenes, but — as people who genuinely love the land have pointed out — more truthfully they are solar factories, electricity machines to fuel mankind’s expansion.

Sometimes flocks of nonplussed sheep are nibbling between the rows, competing with the machines for the energy of sunlight.

Sometimes the angle of the sun turns the fields into a mirror, a blinding metallic glare that hurts the eyes to look at.

Of course I know the arguments: they are infinitely less worse than climate-changing power stations, more palatable than nuclear plants, less intrusive than wind turbines. And I know that the fields they’re replacing, monocropped and glyphosated, are hardly natural anyway but products of tens of thousands of years of human meddling and control, reaching back all the way beyond the Neolithic. But the solid fact remains: a shiny plasticated skin has been clamped upon the land. What was green is turning grey. As an environmentalist I am supposed to applaud the sight, but it fills me with despair.

This will not be the future forever, but it is the future for now. The culture that makes these things will pass, but its objects will remain.

The long past of the Long Man

When traffic is bad, or an accident has closed too many lanes, the coach occasionally detours past the white horse on Cherhill Down, created by cutting turf away to reveal the gleaming chalk below. Only a few centuries old, this monument is by no means ancient — unlike the more stylised white horse at Uffington, which dates back over three thousand years — but the mindset it represents seems to me very, very old: an honouring of the power and beauty inherent in animal forms, an act of devotion, of attention, that reaches back to the horses sketched in charcoal on Paleolithic cave walls. From the window of a Megabus such a vision is absurdly romantic, but these interventions in the landscape were surely intended to have that effect: to lift our eyes from the road, away from our self-involved routines, into other ways of seeing, into other aeons.

Last summer my mother and I walked the South Downs Way, which runs for a hundred miles along the top of the chalk down, on which human feet have beaten tracks for at least eight thousand years. The colours are very simple there — the green of grass, the yellow of wheat, the white of chalk, the blue of sky — and the walking is simple too: you keep the sea to your right and keep going east. On one of our last evenings of walking, aching after eighteen miles, we dragged ourselves on a limping extension to see the Long Man of Wilmington, a chalk outline of a figure holding a staff in each hand, cut into the sloping turf of a Sussex hill. Nobody knows how old he is — he might have been made any time from the Iron Age to the sixteenth century — and nobody knows what the staffs represent. But they look like walking poles.

We stood in silence at the Long Man’s feet and eventually turned for home. Maybe it was partly exhaustion, but both of us were strangely moved. Even though we had offered him nothing, we felt as if we had left something behind.

As well as Wikipedia, of course, you can read more about the history of plastics in this BBC News brief guide and this interesting piece from Scientific American.

The Union of Concerned Scientists has this brief overview of the environmental impacts of solar power.

ClimateCultures is pleased to share Nick’s own selection of five passages from his new book, Where the Wild Winds Are.