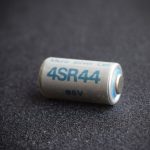 Artist Julien Masson explores memory, material transience and meaning in his an intriguing response to our ClimateCultures challenge to share three objects with personal significance and illustrate the past, present and future of the emerging ‘Age of Human’.

The challenge: the Anthropocene – the suggested Age of Human that our species has initiated – has a complex past, present and future, and there are many versions. What three objects evoke the unfolding of human-caused environmental and climate change for you? View other contributions at A History of the Anthropocene in 50 Objects.

The first object I selected is an amalgam of objects that were given to me in the past. This 3D collage of disparate elements that I would compare to a melange of old memories that have merged into a sort of mnemonic chimera. The use of contrasting material such as mineral and the manmade industrial metal alludes to the clash of the natural world and the manmade activity.

The ubiquitous battery has a limited life span and in many ways symbolises the transience of our contemporary lives… the battery is a container, a vessel to convey energy to devices. In this case, a camera. When its power is spent, it is rendered useless and is disposed of in landfills or recycled. Its shape is simple and functional and I often wonder at the technical codes on these objects. Their meaning is lost to me and they might as well be some long lost cabalistic language.

Offered up to the future

The third object represents our future. My selection suggests a dystopian vision of the future, where virtual experiences replace our spirituality. What will future generation of archaeologists think of such a device in centuries to come? Out of meaning and out of network, maybe it is some sort of votive artefact? An empty shell for the virtual ghost of our times…

You can see a short animation Julien has made, Funland: An Anthropocene amusement park, and more of his artworks at macuse.com and jfmasson.com

Each post that appears in the sequence of A History of the Anthropocene in 50 Objects earns its author a copy of a book that had an impact on my thinking about our topics here – whether fiction, poetry or non-fiction – and which I’ve recently rediscovered in a charity shop. (Delivery in the UK only, sadly!) For his post, Julien receives a copy of William Golding’s classic novel, The Inheritors, “a startling recreation of the lost world of the Neanderthals and a frightening vision of the beginnings of a new age.”