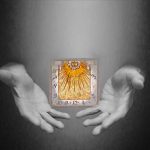 Citizen artist Yky offers three objects that explore Anthropocene themes of our relationship with time and the world and the responsibility that we hold in our own hands, using a common photographic presentation to help make these visible.

The Anthropocene is an amazing concept. On one hand, experts are still trying to find evidence of human activity through geological deposits proving that we have left the Holocene period that started about 12,000 years ago. On the other hand, more and more citizens acknowledge the principle of a drastic change impacting our daily lives due to our unsustainable way of life. On one hand, the compelling need of a proof that is never satisfied with the idea of the best possible assumption. On the other, a critical awareness of our environment. Proof opposed to perception. Objectivity opposed to subjectivity. And in-between, a crying child begging adults to listen to science.

Time in our hands

Three pictures, linking past present and future. All of them in my hands. All of them in our hands. A link creating the continuity between humans and nonhumans that could possibly be visible. Will our awareness go further than simply realizing the mistakes we have made?

In the beginning was Art. Like a Venus 25,000 years old, with its own symbolic and sacred function talking to ancients and echoing shamanic rituals. Mankind and nature as one unique entity.

Today is Coal. Still the most important and polluting source of energy worldwide. Its usage took off in Britain during the sixteenth century, as extracting wood fuel for growing cities became harder and costlier. Switching from a renewable energy to a fossil source…

Tomorrow is a question of Time. For a geologist, time is meaningful over millions of years. For the crying child, tomorrow seems already too late. ‘Time is relative,’ Einstein would have said. But not any longer. The notion of time refers now to our own responsibility. If Mother Earth could be seen as just 24 hours old, mankind only appeared during the last 5 seconds. It is time to realize the true meaning of the Anthropocene.

The Venus pictured here is the Venus de Laussel, a 46cm limestone bas-relief of a nude woman that is approximately 25,000 years old and associated with the Gravettian Upper Paleolithic culture. It was discovered in 1911 in the Dordogne, southwestern France, where it had been carved into the limestone of a rock shelter. It is currently displayed in the Musée d’Aquitaine in Bordeaux, France.

Coal — a combustible black or brownish-black sedimentary rock — formed when dead plant matter decayed into peat and was then converted by the heat and pressure of deep burial over millions of years during the late Carboniferous and early Permian times (about 300 – 360 million years ago). Although used throughout history in places with easily accessible sources, it was the development of pit mining and then the Industrial Revolution in Britain that “led to the large-scale use of coal, as the steam engine took over from the water wheel. In 1700, five-sixths of the world’s coal was mined in Britain. Britain would have run out of suitable sites for watermills by the 1830s if coal had not been available as a source of energy.”

You can explore the story of the formation of the Earth and its life as visualised in a single day in this Quizlet collection of flashcards (with a summary underneath). And the Deep Time Walk app and cards explore the full story in fascinating detail; with these cards, each one covers 100 million years, and humans arrive only with card 47… You can read ClimateCultures reviews of the cards and the app.

And, of course, do explore the many more contributions to our unique series A History of the Anthropocene in 50 Objects — from poets, non-fiction writers, gallery curators, visual artists, creative producers …